How I got here: being a Jew in Baghdad wasn’t safe any more

I was born in Baghdad, Iraq, in 1945. When I was four, it started to get dangerous for my parents to continue to live there. The authorities were after my father. This forced us to leave the country in a hurry. To make sure our house help wouldn’t suspect our plans, we made the breakfast table look as if we were ready to eat in the morning. But by time the sun rose, we were gone.

We escaped our house through a hole we dug under the exterior walls the night before. Leaving through the main door would have aroused too much suspicion. A car was waiting to take us away when we crawled out. We left behind our property, all our possessions and wealth. The smuggler was well-paid. He added us to a group of Shia pilgrims who were on their way to a shrine on the Iraqi-Iranian border. The trip lasted five days and was marked by extreme tension and fear.

My parents were in disguise and my brother and I had several pants and shirts on top of each other since we couldn’t carry any luggage – all our clothes were on our backs. We were forbidden to speak in front of others, so as not to reveal our real identity. We were escaping Jews.

We managed to enter Iran. My father was held by the Iranian authorities and we had to stay in Tehran for about one year. I remember being fascinated by the wedding of the Shah, which I watched from the window of the hotel. I still see clearly the carriage with white horses in which he was sitting.

My parents never spoke about this experience.

From Iran we flew legally to Israel, a country that was still “work in progress”. I went to school there and, after graduating, served in the army for three years. As long as I can remember, I was always interested in the creative process. In 1970, I enrolled into an art school – the Avni Art Institute in Tel Aviv – and throughout the four years of my studies I received a scholarship from the America Israel Cultural Foundation.

I didn’t have well-off parents to depend on, the economy in Israel was in deep recession and starting life as a young artist wasn’t easy at all. So when I was offered another modest scholarship from the America Israel Cultural Foundation, I decided to move abroad. I succeeded in bartering with the travel agent for a one-way ticket to London in exchange for a painting of mine. Then I applied to Goldsmiths, an art school in London, and was accepted.

In the run-up to my move, America kept capturing my attention: it was always occupying the news. There were anti-Vietnam war protests, human rights demonstrations, hippies and happenings all over the place and the art world was at its peak. In the last minute, I ditched London and resolved to move to the United States instead.

America was the Mecca of freedom. Its daring culture was just the right medicine for a 27-year-old art student hungry for adventure. With a one-way ticket and a very limited budget, I chose the west coast.

The hippy culture in California excited me, so I chose to live in the Bay Area. I ended up in Berkeley. It wasn’t easy arriving without real connections, barely a few months worth of money and the feeling that my English wasn’t good enough. The only thing that I could depend on was my art. If it would be received well, then I would be too.

It was difficult getting by as an art student, so I worked in between my school hours as a handy man, giving art classes to amateur artists and I had a job to take care of a warehouse space in Berkeley. I lived in that warehouse too, which was occupied by other artists and musicians.

I graduated in 1974 from the University of San Francisco with a master’s degree, and I was invited to exhibit a one-man show in New York. I had a few art shows in the Bay Area that contributed to me building up my résumé and a small fund to help me out on my return. I saved the money in a safe deposit in a bank in Israel.

When the time came to make the big decision about whether I should stay in America or return to Israel, my father informed me that I had been one of the victims of the most famous safe deposit bank robberies in the history of Israel. All my money was gone. That made my decision easier. Once I came to New York City with my first show, I never left.

In 1979 I received my citizenship on the basis of being an artist who contributes to the culture of America. In 1980 I got married to Tsipi, a graduate student from New York University. We have a son Yori, who is 29 years old. In 2016, it was announced that my work will be added to the Library of Congress as part of a cultural legacy project, which will preserve it for generations of Americans to come.

America made me understand the importance of my heritage, my roots and the journey that brought me here. My art bears the footprints of the cultures that have crossed my life. Forty years later, I am still here. 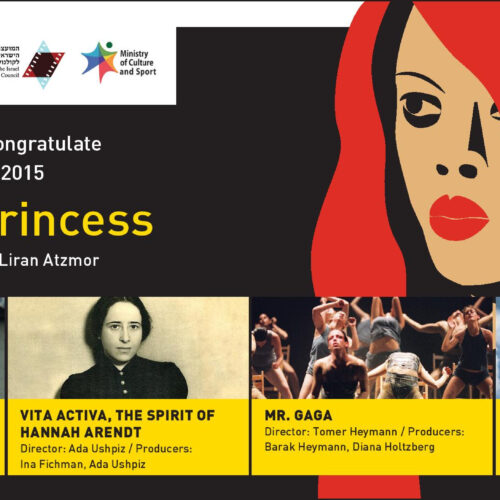