Born in Kibbutz Ramot Menashe in Israel, Noa Shay studied painting at the Jerusalem
Studio School before moving to New York City to pursue a Master’s degree in
Fine Arts at Brooklyn College. Her work, which ranges from sculpture and bar
relief to painting, has been exhibited in Israel and in the US and is presented
in both public and private collections including the Israel Museum. In 2012 she
had a monumental sculpture on display in Riverside Park South in Manhattan and
another collaborative one in Van Cortland Park in the Bronx.

1) What or who inspired you to want to be an artist?
It took me a while to decide to become an artist. I tried doing other things that
seemed more important at the time, but it never felt right. Eventually I
realized that making art was something I needed to do and I built my life to
make it possible. My painting teachers, Jordan Wolfson and Israel Hershberg,
set a living example and made me believe that it was possible to choose art as
a profession.

2) What was your creative journey that has brought you to where you are in your career today?
I always drew and painted as a child and young adult. After the army I went to France
and took courses at the Ecole des Beaux Arts in Paris. When I came back I
decided to study computer science at the Hebrew University in Jerusalem thinking
this way I could support myself while making art. Around the same time The
Jerusalem Studio School for painting and drawing opened by Israel Hershberg and
I was accepted. After graduating from both I lived in Jerusalem for a year,
worked as a computer programmer and painted in my studio. I came to the US to
pursue a Masters degree in Fine arts at Brooklyn College. That year I had my
first solo show at Artspace gallery in Jerusalem and I exhibited my paintings
in group shows in Israel and the US.During my studies, although being a
painting major, I found that I was increasingly drawn to sculpture and had
ideas for works made in sculptural forms. I therefore started making them and
learned how to sculpt at the same time. It took a while, but in 5-6 years I was
able to create a new body of work and exhibit it. A year and a half ago I was
part of a program that created large outdoor sculptures in Riverside park south
in Manhattan and Van Cortland park in the Bronx, and this year I participated
in a few group shows and had two solo shows (one of them still showing at the
Museum of Motherhood in Manhattan).

3) What do you need as an artist today?
First and foremost are ideas – what to make; after that I need the means to create them,
such as skills, time, space and tools; and finally I require ways to show the
work in a way that allows a dialogue between the viewers and the art. In
general today I feel I have enough technical skills and need to find the means
to promote my work and make it more accessible. 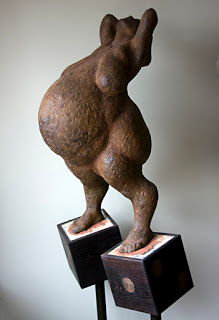 4) What creative project are you working on now?
I just had a baby 3 weeks ago and he is my most creative project at the moment. Before giving birth I was working on a piece made of stone, paper and wood that has been more than a year in the making (stone carving takes time), while also starting a new project in Styrofoam (I usually work on several pieces simultaneously). In the near future I’ll be working at home making small maquettes for future sculptures. I’m also part of a sculptors group, FreeForm, that
makes outdoor public sculpture. We had our first group show this summer at Governors Island Art Fair.

5) Where do you see yourself and your career in 10 years?
I don’t like having a very specific plans for the future. Gideon Ofrat in a recent article ,“The Twilight of the Gods”, states that while in the past there was a defined path for a successful artistic career, today things are less certain. He attributes this to the increasing
number of prizes and museum shows which subsequently reduced their importance, and suggests that today only the accumulation of shows, awards and projects over a long period of time will allow the creation of a meaningful presence. I actually like this idea. In a general sense I can say that I would like to remain creative, show my work in a respectful venue, be recognized and hopefully touch people.

6) What does it mean to you to be an Israeli artist?
I make things that somehow reflect who I am. Part of my identity is being an Israeli. Sometimes it is more apparent in the work and other times less. Often a piece starts for me by listening to a song or thinking about it , mostly it is Israeli music I grew up with. The content of my recent body of work relates directly to my Israeli identity. Israel is a place where what is public and political seems to keep penetrating what is most private. My work is basically about this tension. It addresses issues of motherhood with it’s multifaceted feelings of hope and loss. Any Israeli woman who reaches a certain age is expected to have children, knowing that eventually these children might have to go to war. What is now most vulnerable will later become the frontline. People’s lives are being played by leaders’ policies and fate seems to be determined by greater forces while the outcome is sometimes hazardous. It is also about the personal choices we make and how they affect our lives. 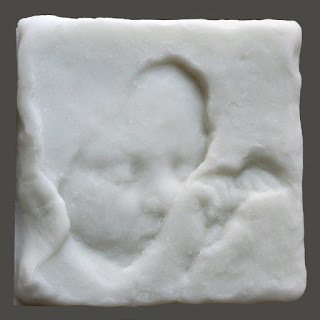 7) What does it mean to you to have an organization like AICF available in the art
world?
The AICF provides support and exposure to Israeli art and artists around the world in the very competitive environment which is the art world. I find the scholarship program (for which I was considered) most important for young artist, but their connections and the support they provide also benefit other young Israeli artists such as myself, by increasing their exposure and providing a channel that would otherwise not be available.