Since arriving in New York City at age 21, flutist, composer and arranger Hadar Noiberg has established herself as a major force in the Cuban, Jazz, and World music scenes. With a language that transcends her Middle Eastern roots, she fuses styles seamlessly, distinguishing herself as both innovative and highly skilled. Hadar’s original material is being performed by her trio, which has a daring and unique instrumentation– flute, double bass (Edward Perez) and drums/percussion (Ziv Ravitz)– that allows sliding in and out of Jazz improvisation and Western harmonies with Middle Eastern and North African rhythms and semitones. Hadar has been a featured performer with acclaimed artists such as Yemen Blues, Dave Valentin, Anat Cohen, Omer Avital, Coco Mama, Alvester Garnett, Joel Frahm, Junior Rivera, Louis Kahn, Rufus Reid and many more.

1) What or who inspired you to want to be an artist?
I come from a musical family where everybody plays an instrument even though none of them took it on as a career, My big sister played flute for 13 years and I remember trying to play it. I was only playing the recorder at the time. I remember myself always having a deep connection with music.

2) What was your creative journey that has brought you to where you are in your career today?
Well, I think that the most important step for me was to leave Israel and move to New York. At the time I was 21 years old, coming from a Classical background and training (orchestras, music academy) and gigging with several bands. I wanted to put myself in the international music scene and see where it takes me. I quickly got involved with the Cuban music scene in NY and did that alongside with jazz. At some point I got interested in “Israeli Music”- what comes out of that melting pot and combination of styles and origins that is happening in Israel. That got me to explore Middle Eastern music and join several bands in that style. It also inspired me to start my own band and record my first CD, Journey Back Home.

3) What do you need as an artist today?
I need honesty, respect, truth. I expect this of myself and the people who work with me. Both on the personal level as well as the musical level. By honesty I mean to bring my musical truth to the table and to share it with people who do the same, to put the ego aside. Respect is how I treat people around me and how I want to be treated. And, of course, I need to be inspired and inspire others, play great music, experience an array of feelings and convey them through music.

4) What creative project are you working on now?
I have my trio with the fabulous Edward Perez and Ziv Ravitz. Last year has been very good for us, we played in festivals and venues in Germany, Romania, Cyprus, Taiwan, Poland, Hungary, Israel and the US. That made the music grow and the trio to become very tight. I’m also working now with the amazing singer Lianne Aharoni- we are in the process of creating a band that will play modern arrangements of older Israeli songs that have a great combination of both Arabic influences and Eastern European influences, as well as original material. I will be the musical director and will arrange the music. It will have a modern touch as well, with lots of groove, improvisation and jazz influences.

5) Where do you see yourself and your career in 10 years?
I see myself performing with my band on the biggest stages in Europe and the US, playing big festivals, giving workshops, recording CDs, having successful tours. I also see myself collaborating with artists that share the same musical values as I do, making great music together and performing internationally. I see myself playing only music that I love, with people that I love, having fun and making a great living out of it. 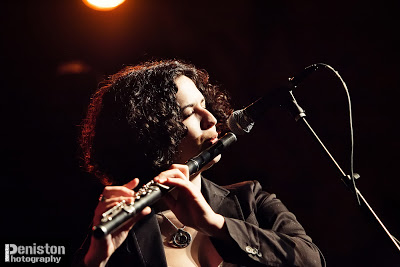 6) What does it mean to you to be an Israeli artist?
It means that, growing up in Israel, I was exposed to many different styles of music and I want to bring that wealth of culture and the warmth of Israel and its people to my music and share it with my audience.

7) What does it mean to you to have an organization like AICF available in the art world?
I think that AICF is a fabulous organization and I’m grateful for their help and support. I think they are very important and valuable to Israeli artists residing in the US but also, if not more, to the young Israeli artists in Israel, striving to build themselves a career.