Time is always the biggest enemy for an artist, but if you use it to your advantage, the possibilities are at your finger tips. Take saxophonist Eyal Vilner. Eyal is not just a musician: he is alos a composer, arranger and teacher. When does this guy take a break? From the release to his bands latest album and a big performance coming up on April 25, this passionate musician explains to AICF the value of time, his creatives projects and his journey to success.

1) What or who inspired you to want to be an artist?
Music became important to me at a very young age. As a kid I spent a lot of time playing different instruments and making up melodies. I think it has always been a natural way of expression for me. I remember that at the age of 15, right around the time I made the switch from classical violin to Jazz Saxophone, I used to listen to some old recordings of Lester Young and Billie Holiday and it deeply moved me. It was an inspiring moment to face that magical power music has, that deep power that emotionally touches and moves you.

2) What was your creative journey that has brought you to where you are in your career today?
The jazz scene in Tel Aviv was a great place to grow up in. A lot of the older guys were very supportive and really wanted to share their experience, and their love of this music. Around high school I acquired my first stage experience as a performer and composer, then at 18 I started different groups of my own. We performed arrangements that we transcribed from old records along with new arrangements and original compositions. Around that time I started to explore writing for different instrumentations ranging from a standard jazz quartet (featuring one horn) to four horns at the front line. In 2007 I moved to New York and completed my degree at the New School for Jazz and Contemporary Music. I had the honor to learn and perform with legendary musicians such as: Junior Mance, Jimmy Owens, Charles Tolliver and Charlie Persip, along with some magnificent up coming stars of the jazz world. New York is such a special and lively city and so is its jazz scene. I was lucky enough to meet and collaborate with some of its finest, and after one year in the city I started my most ambitious project so far, my own 14-piece big band.

3) What do you need as an artist today?
A few more hours a day could help… As an artist today, you’ve got to take care of so many things. Unfortunately, some have very little to do with the music itself. While I’m spending long hours practicing my different instruments (saxophones, clarinet, flute, piano), composing and arranging new music for the big band and for other projects, I have to spend a lot of time on the technical stuff. Getting the music out there takes a lot of effort. Booking gigs, promoting the band and the new album, scheduling rehearsals, copying the music, etc.

4) What creative project are you working on now?
Aside from performing with different bands, theater productions and some commission work as a composer, arranger and orchestrator, my main project these days is my 14-piece big band. This band is a special format of a jazz orchestra I created. It includes: 2 trumpets, 2 trombones, 5 saxophones (that double on flutes clarinets and bass clarinet), piano, bass drums, a vocalist and myself as conductor and soloist. This combination of instruments gives the band the flexibility of a small group along with the power and richness of sounds and colors of an orchestra. For the past four years we’ve been performing around New York at places such as: Smalls Jazz Club, Iridium, Fat Cat and Garage Restaurant. After performing a week long engagement at Jazz at Lincoln Center- Dizzy’s Club Coca-Cola, we went to Tony Bennett’s Studios to record our debut album, Introducing the Eyal Vilner Big Band. The album was released this past January by the New York label- Gut String Records and is now available worldwide. On April 25th we’re going to perform as part of a special 25th anniversary concert of the New School where we’ll feature NEA jazz master Mr. Frank Wess.

5) Where do you see yourself and your career in 10 years?
I hope to keep growing and be a better musician and human being, to be playing and writing pretty music and to share it with more people around the world. It’d be nice to take the big band on tour, perform at important stages and record more albums. I’m looking forward to collaborate with talented musicians and artist in general and to play and compose for inspiring projects and collaborations. 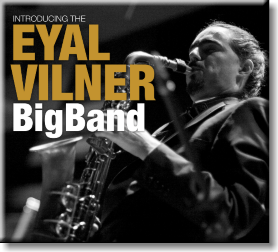 6) What does it mean to you to be an Israeli artist?
I think that improvisation is very natural for me as an Israeli. In jazz we improvise and have to make the melodies we create, come out right in real time. Same as outside of playing music, you just make things happen one way or another. The Israeli attitude has somewhat a street vibe, where you have to improvise and just find a way to make things work. Being an Israeli also means that things are very real. New York wasn’t a train ride away, I had to overcome lots of challenges to get here and play this music. It makes this music real and significant for me and I’m trying to make each note I play or write meaningful. When I started playing jazz I was very lucky to learn from the great Arnie Lawrence who always told us to play with ‘Kavana’. Even though he spoke English he used this Hebrew word that means “intention or with direction,” like playing from your soul and your heart. I think that really makes the difference.

7) What does it mean to you to have an organization like AICF available in the art world?
It’s beautiful to see a big organization that made its mission to support and promote Israeli artists. It’s a great opportunity for artist to network and collaborate and for art lovers to learn more about the artists. 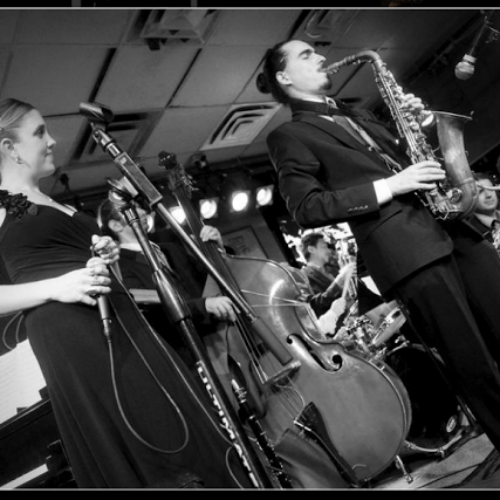