Boaz Vaadia is an internationally recognized sculptor who has been working in New York City for over 30 years. Vaadia’s work is sited in many private and public collections and museums throughout the world, such as the Metropolitan Museum of Art in New York City, The Museum of Modern Art in San Francisco, and the Tokyo Metropolitan Teien Museum in Japan. Vaadia says of his work, “I work with nature as an equal partner. That’s still the strongest thing I deal with today, that primal connection of man to earth. It’s in the materials I use, the environments I make and the way I work.” His work appears as though created by natural forces, such as wind and water; they look simultaneously ancient and futuristic, as if the workmanship forms a bridge from the Stone Age to the digital age. The figure’s rounded forms are anonymous and elemental creating universality and a model of humanity to which all viewers can relate.

1) What or who inspired you to want to be an artist?
As an Israeli born sculptor that grew up on a farm, I was inspired by the nature around me. I work with nature as an equal partner, that’s still the strongest thing I deal with today, that primal connection of man to earth. It’s in the materials I use, the environments I make and the way I work.

2) What was your creative journey that has brought you to where you are in your career today?
A small part of my creative journey has been in working with stone. Bluestone made me realize that I should make my sculptures in the same layering process as the stone forms, and it is what inspires the style of my work. Instead of fighting with the material, I surrendered to it and allowed it to be my partner in the creative process. I also realized that not only is the stone layered, but—as an artist—my knowledge is layered, and those layers really establish who I am; so, working with the natural materials in that same way felt so right and made so much sense to guide me in the creation of my work.

3) What do you need as an artist today?
To always be dedicated to my creative process in the studio, to be constantly inspired and continue to grow as a sculptor.

4) What creative project are you working on now?
I’m currently finishing a private commission, preparing for my upcoming solo exhibition with Baker Sponder Gallery in Boca Raton, FL on November 8 – December 10, and starting a large 3 figure installation commission that I will be working on for the next two or three years. I am also currently in the final stages of preparing a monograph documenting 40 years of my career, which is being published by Hudson Hills Press. The book titled “Boaz Vaadia: 1971-2012” will be released in January, is 11 x 11.5 inches with 284 pages and over 200 full color plates. It is available for pre-order now anywhere books are sold: http://amzn.to/OBdLD3.

5) Where do you see yourself and your career in 10 years?
By then I’ll be in my seventies, and just looking forward to working well into my nineties! 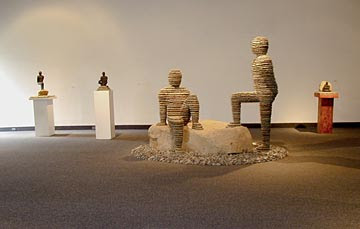 6) What does it mean to you to be an Israeli artist?
As a sculptor who grew up in Israel, I feel that everything I do is measured against the sensibilities that were instilled in me when growing up there. One example of this is the fact that I use Israeli (and biblical) names for my figures. Also, there is the love for nature and Mother Earth, which I developed growing up in Israel. Though I later recognized is not only Israeli but is quite universal, and allows me connect to the rest of the world in general.

7) What does it mean to you to have an organization like AICF available in the art world?
The AICF supported me early on in my career, when it really counts, which enabled me to come to NYC and pursue my passion. Throughout my entire career I have been thankful to the AICF for this support. It marked a pivotal point in my life and was instrumental in leading to my success. To this day, I still carry a deep appreciation for the AICF. It is a great thing that the AICF continues to help young Israeli artist pursue their dreams. 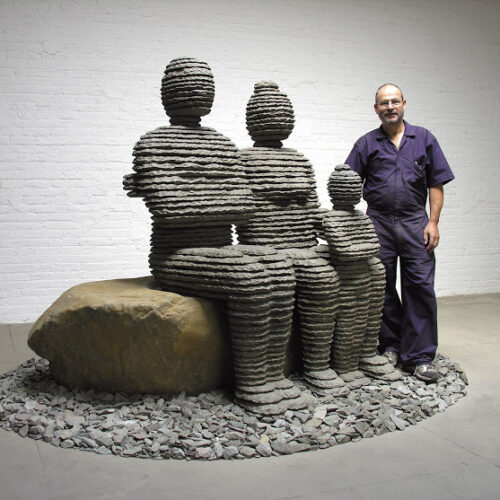