Ms. Etzion is a member of New Haven Symphony and Symphony in C, and has toured the US with the Israel Philharmonic Orchestra. She is a former member of the West-Eastern Divan (Daniel Barenboim), the Tanglewood Music Center Festival Symphony Orchestra (Kurt Masur and James Levine), MIAGI Festival Orchestra (South Africa), the prestigious Holland Music Sessions, and the Jerusalem Music Center Young Musician Unit. Born in Israel, Ms. Etzion started playing the cello at the age of six, and was supported throughout her study years by the America Israel Cultural Foundation (1993-2006) and the Ronen Foundation (2000-current). Ms. Etzion holds a Bachelor’s degree from the Buchman-Mehta School of Music and a Master’s degree from the New England Conservatory. Her main teachers include Mikhail Khomitser, Hillel Zori and Laurence Lesser. 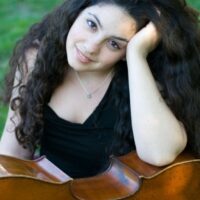