Violinist Yonah Zur regularly performs throughout the US, Israel, and Europe as a soloist and chamber musician in both traditional, as well as contemporary repertoire. He has appeared as a soloist with the Jerusalem Symphony, the Israel Contemporary Players, and the Israel Camerata Jerusalem.

A resident of the Boston area, Mr. Zur has appeared with the Boston Chamber Music Society, A Far Cry, and in recital at University of Maine, Orono. Recent festival appearances include Scrag Mountain Music in Vermont, the Birdfoot Festival in New Orleans, and a third summer with the Newburyport Chamber Music Festival. He has performed at the Marlboro, Yellow Barn, Tanglewood, and Mecklenburg-Vorpommern summer festivals, where he shared the stage with members of the Guarneri, Juilliard, and Emerson Quartets, and with pianists Richard Goode,
Gilbert Kalish, and Bruno Canino.

He was a member of the Carmel Quartet for two seasons and served as assistant principal second violin with the Jerusalem Symphony Orchestra for six seasons. Yonah Zur is dedicated to the field of Teaching Artistry, and he has performed for and interacted with audiences of all ages for the past twenty years. He has been teaching and coaching young musicians since he graduated from his formal studies, and proudly considers his students a
source of inspiration and learning.

Yonah Zur is devoted to new music, and has given numerous world premieres, including the premiere performance of the Violin Concerto by his father, Menachem Zur. His recordings of works by Louis Karchin, Chester Biscardi, Paul Moravec and Robert Cuckson have appeared on the Naxos, Albany Records, and ArkivMusic labels.

Mr. Zur graduated from the Jerusalem Academy of Music and Dance having studied with Avi Abramovich, and earned his Masters at The Juilliard School with Robert Mann. He was a recipient of the AICF scholarships from 1995-2003. 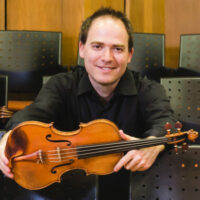