Yoel Culiner was born in Jerusalem, Israel in 1989.

Yoel Culiner has performed as a soloist with the Århus Symphony Orchestra, Jerusalem Radio Symphony Orchestra, the Ashkelon Chamber Orchestra, as well as with the Israel Philharmonic Orchestra under the baton of Zubin Mehta. Several of the Israeli performances were recorded for broadcast by the Israel Broadcasting Authority. As an orchestra player he has worked with all the major Israeli and Danish orchestras – not least of which the Israel Philharmonic Orchestra, the Jerusalem Radio Symphony Orchestra and the Danish Radio Symphony Orchestra. These involvements brought him to Carnegie Hall in New York, the Tonhalle in Zurich, as well as venues throughout Brazil on a concert tour in that country in 2012. In 2010 he joined the Teatro alla Scala for a performance conducted by Maestro Daniel Barenboim. He has had the opportunity to play under an impressive array of conductors over the past few years; Mehta, Mazur, Blomstedt, Dohnanyi, de Borgos, Naganu, Oundjian, Honicker, McAdams and others.

Yoel is also an active chamber musician. He has participated in a number of festivals in Israel, Japan, Sweden, Germany and others. Two of these were the "Kfar Blum Voice of Music Festival", and the “Vilnius Festival“.

To this should be added his participation in master classes conducted by some of the world’s most prominent flutists and teachers - Emmanuel Pahud, Mathieu DuFour, Andras Adorian, Vincent Lucas, Aurele Nicolet, Tomas Jensen, Davide Formisano and Andrea Lieberknecht.

Yoel studied in Israel with the flutists Noam Buchman, Boaz Meirovitch and Eyal Ein-Habar. At present he is continuing his studies with Toke Lund Christiansen at the Royal Danish Music Conservatory. 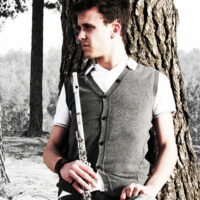