Yaron Gottfried is one of the most prominent musicians of his generation in Israel, a multidisciplinary artist who bridges classical, contemporary and jazz music. Gottfried held the position of Music Director and Principal Conductor of the Netanya Kibbutz Orchestra for 11 years between 2002-2013 with great success, presenting fresh innovative programs, packed halls, rave reviews and over 120 concerts in a season.
He graduated his studies at the Rubin Academy of Music in Jerusalem under Maestro Mendi Rodan.
As of October 2021 maestro gottfried is the new Head of music school at Ono academic college. he formed and led the Composition and Conducting Department at Rimon School for Contemporary Music and Jazz from 2013-2021.

Gottfried’s conducting repertoire spans from the renaissance period to contemporary music. he is a frequent guest at Israel Philharmonic Orchestra, In 2015 he led the IPO replacing Maestro Valery Gergiev at short notice with an Israeli premier of Shostakovich 4th Symphony; the concert received rave reviews from the critics. In October 2016 He was invited to substitute for Maestro Zubin Mehta and conduct all eleven season opening concerts with major artists such as Yefim Bronfman, Khatia Buniatishvili , Prague philharmonic choir among others.

In 2016-17 season he Led a new production of Orfeo ed Euridice with the Israeli Opera with Macao symphony, he conducted the opening concert of the Rubinstein competition and premiered four of his new compositions, Piano Trio, Nocturne for trumpet and Orchestra, Mongolian Suite for symphony Orchestra and a new Song Cycle.
Highlight for 21-22 season include performances of his concerto for electric guitar and with Tacoma symphony orchestra, performance of his Concerto for percussion with both the Israel Philharmonic and Camerata Jerusalem with Tremolo soloists, premiere of his new a new pipa concerto commissioned by Shenzhen symphony, a new Jazz clarinet concerto which will be performed by the legendary clarinetist Eddie Daniels. special collaboration with Idan Reichel one of Israel’s most well known singer songwriter in a full production that Gottfried will lead as arranger and conductor, and multi performances of his “La Folia” for piano which was chosen as an obligatory work for the next “Arthur Rubinstein international piano competition” which will be held at 2022.

Gottfried’s unique approach to rhythm and sound is deeply reflected in his compositions which represent a fusion between genres and styles. His works are published by Sikorski Music Publishers. His “Pictures at an Exhibition-Remake“ was released in May 2014 on a new CD with GPR Records and is distributed by Naxos USA. The album received great reviews from Fanfare Magazine and in the Israeli press. the work was performed over 30 times with ensembles and orchestras worldwide in China, Israel, Estonia, Georgia, Usa, Bulgaria, German premier with .Among his works are concertos, orchestral works, vocal works and orchestral arrangements. His “Baroque Jazz Project” for jazz trio and orchestra has been performed over 50 times, receiving high acclaim all over the world .

Gottfried musically produced and arranged several symphonic production with the IPO for major Artist : a Night with at the Philharmonic for Yehoram Gaon, one of Israel’s most well known singer, a Philharmonic concert with Danny Sanderdon one of Israel’s most well known song write, a Tango album for international acclaimed artist Yasmin Levy which was released by Harmonia Mundi.

The Israel Cultural Excellence Foundation selected Maestro Gottfried as its chosen artist for 2003-2007. He is a member of the prestigious MacDowell Colony in the USA and 1st prize winner of the Young Artists Conductors competition held by the Israel Philharmonic and the America-Israel Cultural Foundation, and 1st prize winner of the Red Sea Jazz Festival Composition Competition. Gottfried’s deep musical interests in jazz led him to perform with major jazz artists such as: Eddie Gomez, Eddie Daniels, Didier Lockwood, Dave Liebman, Ira Sullivan, Randy Brecker, Georgie Fame, Kitty Margolis, Benny Golson and Jimmy Heath to name a few. 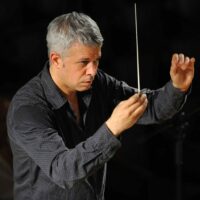