In February of 2009 Segal conducted the Japanese Premiere of Ligeti’s opera Le Grand Macabre at Tokyo National Theater. Other, more recent highlights have been Mahler’s Das Klagende Lied (Israeli Premiere), Dvořák’s Stabat Mater, Stravinsky’s Le Sacre du Printemps (Stravinsky Anniversary), Mahler’s Symphony No.4 and Israeli composer Mordechai Seter’s revered oratorio Tikkun Hatzot (Midnight Vigil). On 9th October 2016 Segal conducted the Israel Philharmonic Orchestra in the framework of the “Israeli-Music Celebration-Week” He conducted a series of concerts with the Israel Camerata –Jerusalem in the 2016-17 season and is scheduled for another in 2017-18.season. In March of 2017 Segal returned to the outstanding Thornton Symphony at the University of Southern California in Los Angeles to conduct Mahler Symphony #6.

Uri Segal was born in Israel. He started playing the violin at the age of 7 and went on with his musical education at the Jerusalem Academy of Music and Dance (Segal received the Honorary Fellowship of the JAMD in 2016). At the advice of Maestro Moshe Atzmon, Segal traveled to London to further his studies at the Guildhall School of Music and Drama, majoring in Orchestral Conducting.

In 1969 Segal took First Prize at the prestigious International Dimitri Mitropoulos Conducting Competition in New York and for the next year served as Assistant Conductor to Leonard Bernstein and George Szell at the New York Philharmonic. He then returned to London where he and his family stayed on for the next 10 years.
His first professional engagement was with the Tivoli Orchestra in Copenhagen replacing an ailing maestro on very short notice. (Maurice André was soloist making his Scandinavian debut). Segal returned many times to that orchestra and was frequent guest conductor with other Danish orchestras (He was elected to lead the Aarhus Symphony on their tour to Canada). Soon after, there was his debut with the Israel Philharmonic (Vladimir Ashkenazy as soloist) and the first of several extensive tours to New Zealand conducting the NZ National Symphony.

Segal made his London debut conducting the English Chamber Orchestra with Radu Lupu as soloist. Concerts with the Royal Philharmonic and other UK orchestras followed, including an invitation to the Edinburgh Festival.
1972-3 turned out to be the most meaningful for Segal’s future career: He made his very successful debut with the Berlin Philharmonic conducting Mahler Symph.#4, Took the WDR Orchestra of Köln on a tour to Switzerland and the Bamberg Symphony on their long German tour. Following his debut in Stuttgart that year with the Stuttgart Radio Symphony Segal was asked to take that orchestra combined with members of the Stuttgart Chamber Orchestra on a historic tour to Poland, the first ever tour of a West German orchestra to that country since World War II. Segal then stayed with the Stuttgart Radio Symphony as Principal Guest Conductor for the next 15 years Also around that time DECCA invited Segal to record an LP of music by Stravinsky (Firebird Suite of 1919 & Symphony in C ) with l’Orchestre de la Suisse Romande in Geneva.

Invitations for guest appearances followed with major European and American orchestras. In Europe Segal led among others the Berlin Philharmonic, Royal Concertgebouw, London Symphony, London Philharmonic, the Philharmonia, Orchestre de Paris, Orchestre de la Suisse Romande and Stockholm Philharmonic. In the USA and Canada he conducted the Symphony orchestras of Chicago (at Ravinia), Pittsburgh, Detroit, Dallas, Houston, Montreal, and Rochester. In Israel he regularly conducts the Israel Philharmonic, The Israel Camerata and the Jerusalem Symphony.

During a tour of Japan with the Stuttgart Chamber Orchestra Segal was approached by a delegation from the Osaka Prefecture offering him the unique opportunity to create and lead a new symphony orchestra that became known as the COO – Century Orchestra Osaka. During his 8 years collaboration with that ensemble the COO gained the reputation of one of the best in Japan and made regular appearances in Tokyo’s Suntory Hall. To celebrate the inauguration of the new Osaka Inernational Airport The COO and Segal went on a USA culminated in a festive concert at New York Carnegie Hall.

The same year Segal took up the position of Music Director of the renown Chautauqua Festival in New York State with which he stayed for 20 years.

Segal made his operatic debut conducting 'The Flying Dutchman' at Santa Fe, and has since conducted opera in Italy, France, Germany, Japan, Israel and the USA. 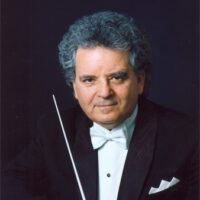