Saxophonist and composer Uri Gurvich was a member of the Tel Aviv Jazz Orchestra and won at 20 the Jazz Player of the Year competition in his native Israel before coming to Berklee College of Music, where he studied under Joe Lovano.

Based in New York for the past decade, Gurvich won great acclaim as a bandleader with his debut album The Storyteller (Tzadik), featuring some of the most prominent voices on the contemporary jazz scene: Argentinian pianist Leo Genovese, Bulgarian bassist Peter Slavov, Cuban drummer Francisco Mela, and special guest Chris Cheek on tenor sax. All Music Guide called Gurvich, “a major new voice in jazz”.​

Their third album, KINSHIP, was released in 2017 on the boutique French label, Jazz Family. The album was an 'Editor Choice' pick on Jazz Times and was featured on Stereogum, which called it "Unique and hypnotic". 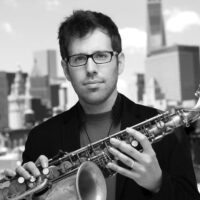