Tom Palny is an active soloist, ensemble and orchestra player, graduate of Manhattan School of music where he studied with world-renowned Violinist, Violist, and conductor Pinchas Zukerman and his associate, Patinka Kopec.

Mr. Palny began playing the Violin at nine and was awarded a scholarship for promising talent at the same year. At the age of sixteen began playing the Viola and was awarded a Scholarship from the America Israel Culture Foundation (AICF) for outstanding performance. At the Tel Aviv Conservatory, a preparatory music school, he won an honorary award in the Conservatory’s competition and studied Violin and Viola with Prof. David Chen, who had been a student of Galamian, DeLay, and Kroll. At the Conservatory he played in the conservatory’s leading quartet co-sponsored by the “Young Musicians’ Group” of the acclaimed Jerusalem Music Center and the AICF. With that quartet he performed around the country and recorded many concerts for broadcast by the National Israeli Radio.

In 1996 he began his studies at the respected Thelma-Yelin high school of arts in Israel and graduated in 2000 with honors in the classical music department. Throughout his studies, he played as a soloist and as the principal Violist in the High-School’s symphony orchestra and performed with it in concerts in Israel and Europe. On Israel’s 52nd independence day he played his solo debut on a live broadcast on the Israeli radio, performing the Hindemith solo sonata Op. 25, no. 1.

Mr. Palny participated in several Music Festivals, among them the Perlman Music, where he appeared with the Perlman Music Program Chamber Orchestra in performance at the Mostly Mozart Festival at Avery Fisher Hall. He took part in the NY String Orchestra Seminar lead by Jamie Laredo where he appeared in Carnegie Hall, and participated in the Young Artist Programme taught by Pinchas Zukerman, where he collaborated with Pinchas Zukerman in a chamber music concert in the National Arts Centre in Ottawa. Mr. Palny also participated in Daniel Barenboim’s West-Eastern Divan workshop for Israeli and Arab musicians in Seville, Spain, and was the principal Violist in its orchestra.

Mr. Palny was featured in several radio broadcasts on the “Young Artists Showcase” on WQXR, the classical radio station of the NY times. He has participated in many master classes, taught by Itzhak Perlman, Pinchas Zukerman, Tabea Zimmermann, Arnold Steinhardt, and Nobuko Imai among others. In chamber music Mr. Palny had collaborated with artists such as Sylvia Rosenberg, Isidor Cohen, Timothy Eddy, and others. In the past season Mr. Palny appeared in a chamber music concert in Carnegie Hall’s Weill Recital Hall with his Piano quartet “The Amity Players”. A CD recording of this group will be coming out under the Canadian label “Marquis Classics” next fall.

“AICF scholarships in Israel, at the early stage of my studies, have been a goal for which I had been looking up to. Once I’ve received it, after auditioning in front of a jury of the most respected musicians in the field in Israel, it has meant for me an affirmation and an indication that I have reached a certain level of playing of which I can be proud. The AICF fund has later become a home for which I can turn to for help, for ideas, for support in many of the projects and needs that arose of my musical pursuit. The people who are working in this establishment are all of the most warm and carrying kind I have seen in any financial aid foundation. I am forever grateful for their dedication and love for helping the arts in general and the art coming from Israel in particular, since it is especially so abundant there.” 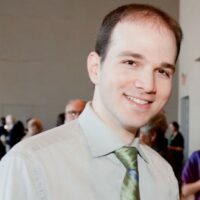