The Tel Aviv Trio has played in some of the world's most spectacular concert halls, including the Philharmonic in Berlin, the Auditorium du Louvre in Paris, the Kennedy Center in Washington, the Wallace Collection in London, the Conde Duque in Madrid, the Tivoli Concert Hall in Copenhagen, and other major concert halls throughout Israel, Europe, the United States, Southeast Asia and Australia. The Trio recently performed Beethoven’s Triple Concerto with the Young Israel Philharmonic at the Tel Aviv Museum. In addition, the Trio was the first Israeli ensemble to be engaged to perform concerts in Qatar (the Persian Gulf). The Tel Aviv Trio can be heard on numerous radio stations, including BBC, France Musique, Radio Italia, WQXR, ABC, NDR, SWR and Israel’s Voice of Music.

The Tel Aviv Trio is currently participating in the Professional Piano Trio Program at the New England Conservatory in Boston, under the guidance of Donald and Vivian Hornik Weilerstein.
The Tel-Aviv Trio is a recipient of the America-Israel Cultural Foundation and the Ronen Foundation grants.

"We actually couldn't imagine our development as artists without the AICF. It has been such an integral motivating and supportive part of our lives and we will be always grateful for it." 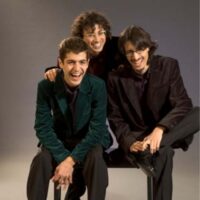