Its concerts have been received enthusiastically by both critics and audiences ("An international class level of playing worthy of Carnegie Hall" Ara Guzelimian, artistic adviser at Carnegie Hall; "the exquisite musicians were sweeping the public off their seats" Jungfrau Zeitung, Switzerland).

The Ensemble has performed in the world's major concert halls, such as Carnegie Hall in New York, Konzerthaus in Vienna, Teatro Colon in Buenos Aires, St. Petersburg Philharmonic Hall, and Sala Sao Paolo in Brazil, in major international festivals, such as Interlaken Classics, Switzerland, and festivals in Russia, Poland, Austria and Greece. The Ensemble has also performed in live radio and TV broadcasts in Europe and in Israel.

The Ensemble is recipient of several major awards, such as Landau Award for Performing Arts 2015, award for excellence from the Buchman-Heyman Foundation, awards of The Tel-Aviv Municipality and The Ministry of Culture, and of grants by The America-Israel Cultural Foundation, and The Rich Foundation.

The Ensemble comprises 30 of Israel's finest young musicians (ages 20-35), among them players in leading Israeli chamber groups, young soloists and winners of competitions. It was formed out of the desire to create a young Israeli professional chamber orchestra of the highest standard. It is recognized today as a vibrant, fresh voice in Israeli classical music. 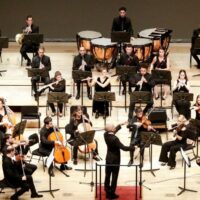