Tamir Tavor was born in Israel, 2002. He began his violin studies in 2010, and since 2016 he is learning with Prof. Chaim Taub as well as Mr. Roi Shiloah.
In 2021, Tamir was awarded the first prize in the BMSM String Competition. In 2013, he took the 2nd place in the National Violin Competition in Ra’anana. He won the 1st prize in the annual Spring Competition in Ra’anana, both in 2015 and 2016. Tamir was awarded AICF scholarships since 2015, and was also awarded scholarships with exceptional distinction since 2019.

Tamir is part of the Perlman Music Program. He also participates regularly in “Keshet Eilon” seminars and performed there as a soloist several times. For example, in June 2021 he performed as a soloist, accompanied by the Tel-Aviv Soloists Ensemble, in Keshet Eilon’s concert series.

Tamir played several times as concertmaster in the BMSM orchestra. He also played as principal concertmaster for the RYSO, for 3 years. He also played with them as a soloist, both in Israel and abroad. Tamir is playing on a Jean-Baptiste Vuillaume violin, as well as a bow kindly loaned to him by the AICF.
Tamir is a grant recipient of the “Ronen Foundation”, and he participates regularly in their concerts. 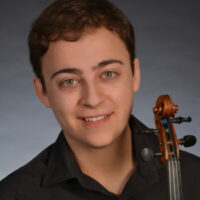