Sahar Rokah explores the relationship between image and medium, searching for the tension between them. In her work, she juxtaposes various mediums such as photography, painting and sculpture in order to excite the familiar mechanism of passion in the viewer’s mind. She also touches on questions of material edges, beauty, power, death and essence, while provoking questions on social and cultural matters and what it means to be alive.

In 2002, Sahar began her studies at the Avni School of Visual Arts. From 2005 – 2008, she attended The School of Art – Hamidrasha at Beit Berl College, an institution known for its focus on the interplay between society, art, and culture where education is seen as a vehicle for effecting social change. In 2008, Sahar received a scholarship for outstanding artistic excellence from Beit Berl College. In addition, she is the recipient of other awards and grants, including scholarships for gallery exhibitions in Tel Aviv at The Artist Studio and Gallery Florentin 45.

The Contemporary Art Gallery in Tel Aviv featured Sahar in her first solo exhibition, “Sunset,” in 2010. 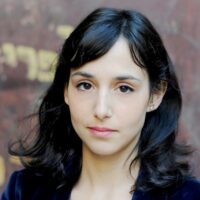