Roy Menachem Markovich makes haphazard realistic cinematography and ironically playful sculpture. His works humorously mimic the styles of genres such as candid camera, reality TV, and documentaries, as well as monuments and trophies. In his works, Markovich breaks down the components of various conventions by revealing the breaches between what is considered real or fake. In his sculptural environments, Markovich plays with the conventions of public, outdoor sculptures, producing small scale sculptures on a semi-heroic display. These downsized sculptures, which have a ridiculous unconvincing appearance, demonstrate that the original is no less absurd.

Markovich is a BFA graduate of Art at Beit Berl College. He has had solo exhibitions at venues such as RawArt Gallery in Tel Aviv, Klubovna Gallery in Brno, Bei Koc in Hannover, the Artists' Residence in Herzliya, and Message Salon in Zurich. Markovich’s works have been shown in numerous group exhibitions around the world at venues such as the Contemporary Jewish Museum in San Francisco, the Helena Rubinstein Pavilion of the Tel Aviv Museum of Art, MeetFactory in Prague, the CCA in Tel Aviv, The Israeli Centre for Digital Art in Holon, Torrance Art Museum in Los Angeles, Arad Contemporary Art Center, Kunsthalle Faust in Hanover, the Tel Aviv University Art Gallery, as well as the Athens Biennale and the Tel Aviv Biennial.

He has participated in several residency programs, including Ida Schir, Hanover, Espace Croix Barngion, Toulouse, and Message Salon Embassy, Zurich. He was awarded The Advancement Art Award for most recent contemporary art by Kunst Zurich. 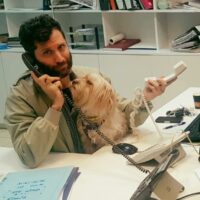