Rina Yerushalmi (1939), Israeli theater and opera director, founder and artistic director of the Itim Theatre Ensemble and professor of acting and directing at the department of theater arts at Tel Aviv University. Born in Afula, Yerushalmi grew up in Haifa where she started her studies in dance. Her education combined dance, movement, and acting. In England she studied classical dance along with the Laban technique and the Alexander technique. She continued her studies of the Laban technique in Germany with Kurt Joss. In Israel she worked with Moshe Feldenkrais on the Feldenkrais technique. Yerushalmi also studied acting with Nola Chilton, Peter Brook, and Joe Chaikin. She studied Noh and Kyogen in Tokyo, Japan, at Carnegie Mellon University in Pittsburgh, PA, and in New York.

Yerushalmi directed in Israel and in the U.S. Her preferred materials were classical plays of Shakespeare, Pirandello, Lorca, Ibsen, and Beckett.

In 1989 she gathered young unknown actors and founded her own group, the Itim Theatre Ensemble. Their first production, Shakespeare's Hamlet (1990), performed in the rehearsal studio of the Cameri Theater of Tel Aviv, was a huge success. Yerushalmi's interpretation of Hamlet was based on the physical and spiritual presence of the actors on stage, their collective effort to create on stage a fictional world based on theatrical images and metaphors, and the interaction between their gestures and movements and the audience's imagination. Shakespeare's Romeo and Juliet (1991) and Buchner's Woyzeck (1992) followed. In each one of these productions Yerushalmi developed her special dramaturgy methods. She adapted the plays and inserted different materials, not always dramatic, thus enlarging their scope and opening them to various readings. The performance was fresh, young, and energetic and the theatrical space was filled with fantastic accessories and stage elements intended to broaden the theatrical framework of the performances.

In 1994 Yerushalmi set off to create her spectacular Bible Project. The project originated in her wish to research the cultural roots of Israeli society. She was intent on finding out whether the Bible was still approachable to Israeli-born, non-religious young people. This research took her and her actors to the desert, where they read the Pentateuch and were overwhelmed by the beauty of the text and the relevance to modern-day Israel. Yerushalmi adapted the Torah (the Pentateuch) without adding or changing the texts, thereby creating two performances: Va-Yomer va-Yelekh ("and he said and he went," 1996), and Va-Yishtaḥu va-Yar ("and they bowed and he saw," 1998). The result was a dynamic, theatrical performance of beautiful stage images and a unique experience of actors' group work. The Bible Project was performed for more than five years in Israel and in Hamburg, Berlin, London, and New York.

In 2001, Yerushalmi set out on another big project: this time she was led by the wish to analyze vengeance on the personal, the familial, and the national levels. It brought her back to Greek tragedy, to ancient and modern plays dealing with the Trojan War. The result was Mythos, a four-hour performance in which the events of the Trojan War were repeated in order to show their influence on the lives of the last generation, that of Electra and Orestes, the victims who become murderers because of the heritage of vengeance they carried along. The relevance to the Israeli-Palestinian conflict was evident, although Yerushalmi did not insert any contemporary indications in the text or in the stage design. The images on stage were constructed of different components – a stage design that deconstructed the stage as the myth unfolded, while huge projections and scientific explanations of the astral system accompanied the scenes. The actors working as a collective body, the chorus facing Electra and Orestes, incarnated the different characters of the plots, but most of all they danced, sang, and lamented, following the tradition of the ancient Greek chorus. Mythos was performed in Israel for two years. It was also invited to Zurich and to the Summer Festival of the Lincoln Center in New York.

Yerushalmi worked at the Israeli Opera. In 1997 she directed Humperdinck's Haensel und Gretel, and in 2000 she directed Richard Strauss' Elektra for a production of the Jerusalem Festival in Caesarea. Yerushalmi received many prizes and awards for her performances: in 1990 she received the Margalit prize for Hamlet; in 1992 the Moshe Halevi theater prize for Woyzeck, best directing and extraordinary contribution to Israeli theater; in 1998 an award of the Israeli Academy of the Theater for the Bible Project; and again in 1999 the Milo award for the Bible Project; the Rosenbaum award for the founding of the Itim Theatre Ensemble; in 2005 the Landau prize of Mif'al Ha-Payis for excellence in creating an original, powerful, and total theatrical language. In 2001 she received an honorary doctorate from the Hebrew University of Jerusalem. She was the recipient of the Unesco Fellowship for Theater Research and of the Corporation for Public Broadcasting (CPB) fellowship for television, U.S. 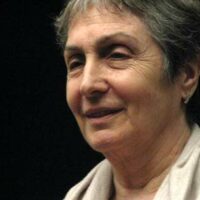