Rina Schenfeld – a dancer, choreographer and Director of a Dance company & School, began her career in the Batsheva Company as one of its founders, as a choreographer and chief dancer who performed the main roles created by the greatest choreographers in the world (Martha Graham, Jerome Robbins, John Cranko, John Butler, Glen Tetley, Robert Cohan and many others) and won a great acclaim worldwide.

The New York Times defined her as “One of the most important dancers of our generation”. Others named her “Queen mother of Israeli Dance”, “The ‘High Priestess’ of Israeli Dance”,”A Walking Legend”. In 1979 she founded the Rina Schenfeld Dance Theatre and created some 100 works of dance programs for solo and troupe performances which have been staged on the most prominent venues in the world, such as the Theatre de la Ville in Paris and the festival Next Wave in New York (as well as in Holland, Belgium, Finland, Poland, Czechoslovakia, Mexico and recently also in the Far East, in India, Japan, China, Korea and Thailand) where they received high appraisals.

Rina Schenfeld invented and developed a unique dance language which uses objects and materials that highlight and enhance the human body. In this respect she was inspired by the Bauhaus tradition and soon was considered one of the central interpreters of this central-European trend. Her development moves from the concrete and material to the abstract and spiritual, from the body to the spirit; from objects that accentuate the human body language she attained the words which may be the body language of the angels.

Her artistic work in Israel and abroad has won her recognition, appreciation and prestigious prizes, among them the Young Choreographer Prize in Connecticut College, USA, in l960, the “Golden Star” medal in the international Dance competition in Paris in 1971, three “Kinor David” [David’s Harp] prizes for “Threads of Solo” in 1979, “tins, Sticks and Balloons” in 1980, “Seas and other Shores” in 1982, the “Oscar Na’a’mat” prize for her life’s work in Dance in 1994, the Creation Prize of the Ministry of Culture and Education for 1997. In 2001 she won the Landau Prize for the Performing Arts in Dance. The prize was presented to her for her singular contribution to Israeli Society and Dance, and in 2003 she received the EMET prestigious prize which is considered the Israeli Nobel Prize. In 2007 she won two distinguished Italian prizes, “In Embrace of Peace” in the Altro Passo festival in Nardo, and the Negru Amaru prize in the Lecce region. In 2009 Rina Shcenfeld was awarded an Honorary Doctorate from the University of Beer-Sheva and a prize for her activity from E.M.I. (the Israeli Organization of Artists).

This year marks 50 years of her widespread activity which were celebrated in a special production “Bach” with the music of Johann Sebastian Bach, in a photos exhibition and performance tours in the USA, Poland and Thailand.

“An original dancer and creator who continues to develop in the singular style of her work out of limitless curiosity and search … she is not only a dancer of beauty with a unique stage presence, for years she has directed a dance troupe that extended the borders of the medium towards an original and rich dance theatre combining creators from other areas while exploring new forms of expression. She has been teaching all these years modestly and resolutely, educating generations of students. Nevertheless her status as “The First Lady of Dance” has never stopped her from being a pioneer of innovative experiments. 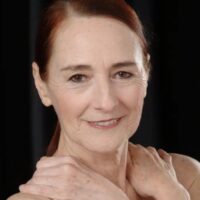