Re'ut majored in Theater at the Thelma Yelin High school of Performing Arts, Tel Aviv, where she also toured as the vocal soloist of its Big Band. After moving to NYC and studying the Strasberg "Method" with Terese Hayden she decided to pursue a classical singing career. Her operatic roles include Anna (DIE SIEBEN TODSÜNDEN/Weill), Donna Elvira in Mozart’s DON GIOVANNI, Paride in PARIDE ED ELENA/Gluck, Komponist (ARIADNE AUF NAXOS).

On the concert platform, Re'ut has performed in venues such as Lincoln Center, Spoleto Festival, USA, Jerusalem Music Centre, The American Academy in Berlin, Bayreuth Museum of Art, the Tel-Aviv Museum of Art, and for WQXR radio.

A passionate champion of new music, Re'ut has performed and premiered many important new works by composers such as Pulitzer Prize winning composer David Del Tredici, Samuel Adler and Dalit Warshaw, in addition to recording with John Musto and Yehudi Wyner for Naxos, AlbanyRecords, Furious Artisans and YIVO label. She has collaborated with players of the Israel and Berlin Philharmonic, ensembles such as the Israel Contemporary Players (PIERROT LUNAIRE), Cygnus Ensemble, the actor Theodore Bikel and choreographer Yasmeen Godder (Ensemble nominated for the Bessie Award.)

In 2013/14 season, she will make her debut with the Detroit Symphony Orchestra in the world premiere of David Del Tredici’s Dum Dee Tweedle under the baton of Leonard Slatkin. She will also be performing Samuel Adler’s NUPTIAL SCENE at Juilliard for his 85th Birthday celebration concert, recording a Rachmaninov and Israeli-Russian composers of his era project for Arabesque Records, and touring an evening of Gustav and Alma Mahler’s songs and letters. In 2014/2015 She will be touring Matthew Greenbaum’s video-opera ROPE & CHASM as well as collaborating with Momenta String Quartet in premiering a piece written for them by David Glaser, and recording works by Steven Burke.

Her standard concert repertoire ranges from Haydn’s ARIANNA A NAXOS to Mozart’s REQUIEM to Schoenberg’s Opus 2 (orchestrated for Re’ut by Gil Shohat), performed with St. Cecilia Chorus and Orchestra, The Israel Chamber Orchestra and others. Re'ut lives in NYC and studies with Gerald Martin Moore. 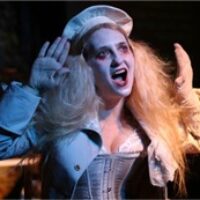