Rami Maymon graduated the BFA and MFA from the Departments of Photography and Fine Arts, Bezalel Academy of Art and Design, Jerusalem and Tel Aviv and the Cooper-Union New York. Recipient of the Joshua Rabinowitz Foundation Prize for the Arts (2004) and the Young Artist Award, the Israeli Ministry of Culture and Sport (2009).

Maymon has had solo exhibitions at the Artists Studios Gallery, Tel-Aviv / Tal Esther Gallery, Tel-Aviv / Noga Gallery of Contemporary Art, Tel Aviv / the 12th Biennale of Contemporary Art, Naples, Italy / Herzliya Museum of Art, Herzliya / Hinterhof Space, Bazel, Switzerland and at the Tel-Aviv Museum of Art, among other venues. Maymon participated in numerous group exhibitions in Israel and abroad and his works were published in many books and magazines.

“In my work, I use and juxtapose a variety of media, such as photography and installation, touching upon notions such as immanence, originality, and authenticity. My works echo and activate a familiar mechanism of passion in the viewer’s mind, exploring potential relationships between signifier and signified, art and the banality of life. By creating an enigmatic space, I try to provoke the viewer to become an active one, giving him the choice of re-settling within the gap between what actually exists and its potential; Forming for the viewer a fertile ground on which to project his perceptions.

By dealing with the relationship of image, matter and space, I try to address fundamental questions pertaining to the medium of photography and the photograph’s changing status over time, while exposing the mechanisms of production and control associated with photography in particular and in the field of art and culture as a whole.

In my work, I address issues of identity, singularity and essence on the level of the individual image, as well as that of the medium in general. This is sometimes appended by forcing a sculptural or abstract approach to the photographic act, challenging the possibilities inherent in it. Most of my photographed subjects seem to lend themselves to the camera with a softness fused with sensuality and devotion, but most of all, suspicion.

I am interested in this specific moment when the body touches matter, the photography brushes against the design, and the organization becomes the meaning. My work revolves around the polarity and the tension between two-dimensionality and three-dimensionality, static and organic, revelation and concealment, between documentation and staging, intervention and neutrality, simplicity and sophistication, taste and preconception – between the space captured within the photograph and the actual presence of the photograph in a given space.” 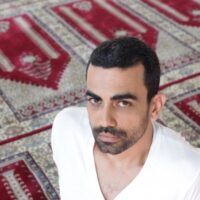