About Opera in Williamsburg (Virginia)

Opera in Williamsburg, Virginia, is an innovative opera company founded in 2012 by Israeli Williamsburg resident Naama Zahavi-Ely. It is dedicated to bringing to Williamsburg, Virginia intimate fully-staged operas with a world class cast, in the original languages with English supertitles. Funded by ticket sales and the support of members of the community, Opera in Williamsburg is committed to the highest artistic standards and maintains a relationship with the International Vocal Arts Institute (IVAI), under Joan Dornemann and Paul Nadler.

The artistic quality of the productions has been extraordinarily high, achieved by a very careful selection of each performing team and having a significant rehearsing period. The company collaborates with the America-Israel Cultural Foundation to include outstanding Israeli singers in its casts, many of them former AICF scholarship recipients (Yasmine Levi-Ellentuck, Elinor Sohn, Maya Yahav-Gour, Michal Doron). The company performs in a beautiful location with an extensive tourism infrastructure in April and October, which are particularly beautiful times of the year.

Opera in Williamsburg's 2016-17 season includes Verdi’s Rigoletto on October 21 and 23, 2016, and Mozart’s Marriage of Figaro on April 21 and 23, 2017. Both productions will be conducted by Maestro Jorge Parodi, the company’s music director. Rigoletto will be directed by Isabel Milenski and include Michal Doron from Israel as Maddalena, together with Kyle Pfortmiller as Rigoletto, Eric Barry as the Duke of Mantua, and Meghan Picerno as Gilda. The Marriage of Figaro includes Eitan Drori from Israel as Basilio/Kurzio, side by side with Eric Lindsey, Christine Taylor-Price, Eliza Bonnet, Suchan Kim, Elizabeth Tredent, Branch Fields, Fiorella Velez, and Megan Pachecano. 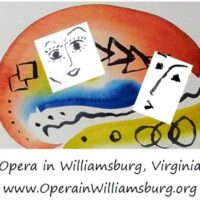