Olaf is a passionate German artist whose works have featured in exhibitions, publications and prizes in Germany, the UK and US. His primary interest is in exploring what it means to make a painting today: how to balance art history, contemporary practices and the current overwhelming visual culture to find a distinctive path amidst it all. With Autobiography as his main subject, he composes versatile paintings that shift from large-format scenes with an illustrative flair, to muted portraits marked by colour and spatial contrast.

Kuhnemann is using an archive of photographs as a starting point for asking questions about painting. Working in watercolor, gouache and oil on small and very large formats.

Among his prominent group exhibitions in the past years are Facelook at the Tel Aviv Museum (2012);
Update Your Reality at Alexander Ochs Galeries Berlin/Beijing (2011);
Family Traces at the Israel Museum in Jerusalem (2009);
Displacements at the Bat-Yam MOCA (2007);
The Rear at Herzeliya Biennial (2007);
Today even the Drawers are Winners at Klara Walner Gallery in Berlin (2006).

Kuhnemann has received the Tel Aviv museum Isracard prize for an Israeli artist (2008); and the National Arts Club painting award in New York (1992-1993). 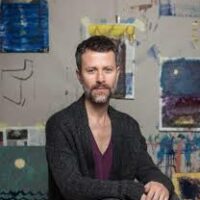