Ofri Eliaz was born in Afula, Israel and spent her early childhood in the north of Israel. At age ten moved with her family to Jerusalem where she attended in her teenage years the High School of Arts.

During her army service, she performed as a singer accompanied by a guitar player. After her military service, Ofri spent a year at Rimon School for Contemporary Music in Ramat Hasharon. In 1997 she moved to New York City to study music and music therapy. She received her first degree in Music Jazz Performance from Mannes School of Music and her master's degree in music therapy from New York University.

During these years Ofri performed all over the U.S with a program of Ladino and Israeli songs. In 2003 she came back to Israel and released her first CD of Ladino songs: "Ya Salio De La Mar - Judeo Spanish Songs". The musicians in this album are some of the top players in New York City, including Frank London, Steve Gorn, Omar Faruk Tekbilek, Alex Skolnick, John La Barbera, Joe Deninzon, George Mgrdichian and Shai Bachar.

In 2003 Ofri received a grant as an "Excellent Artist" from the Ministry of Absorption.

Ofri appeared on several T.V and radio shows. in 2019 she released a new CD in Hebrew. Most of the songs, lyrics as well as compositions, were written by herself. She continues to both perform and be engaged in music therapy.

"Ofri Eliaz gives Ladino another vision, almost as if it were a perspective from above. Eliaz designs (with the help of her musical producer Shai Bachar) Mediterranean flowing music; music which is both eastern and cosmopolitan, like a haute couture designer who makes the optimal ethnic dress, to 12 Ladino songs. The result is enchanting and intriguing. The Ladino receives a surprising twist; the title song has a Baroque quality. Fresh and interesting."(Amos Oren, Yedioth Ahronoth, 2005 ) 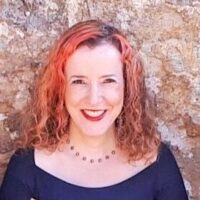