Noémi Schlosser (1978) was born in Antwerp, Belgium.
In 2001 she graduated under Tony Award winner Ivo van Hove from the Antwerp Theatre Conservatory. After freelancing in both television and theater performances (winner Edinburgh Festival with Ontroerend Goed in 2007) she started her own theater company in 2004 called Salomee Speelt. Over the next decade, she wrote, directed, performed and produced a myriad of music theatre productions with the support of the Flemish Government and the European Union, as well as private investors. She took her shows abroad to the United States, Israel and Africa, performing in four languages.

Noémi curated the Jewish Cultural Year of the Province of Antwerp in 2008/9. In 2011 she was invited as artist in residence for ShPieL, theatre of Identity in Chicago (sponsored by Theatre J/DC, Lookingglass theatre/CHI and the New York Theatre Workshop) where she created four shows.
After an internship for the Opera de Paris on their American tour in 2012, Noémi joined the Belgian Ministry of Operatic Affairs Company. In 2017 she made Aliyah and started ‘The Youth of 1948’, a historical documentary, interviewing over 70 speakers (Ruth Dayan, Haim Guri, Amos Horev, Rafi Eitan). Pre Corona, Noémi taught the opera ensemble class at the Jerusalem University/Academie of Music and dance. (Master in theatre pedagogy 2001) and works as assistant director at the Israel Opera. In 2019 she directed the Israeli Premiere of Gounod’s ‘La Colombe’ for the Jerusalem Opera.

Since the breakout of the COVID-19 pandemic Noémi prepared the direction of two opera productions to open, hopefully, in the summer of 2021 and is researching/writing a historical Yiddish theatre show on the Jewish Mob of the Lower East side before the First World War and the rise of workers Unions.

Noémi Schlosser is a member of the ROI community since 2011, Asylum art beneficiary in 2013. In 2013 she was selected for the Berlin TheatreTreffen. 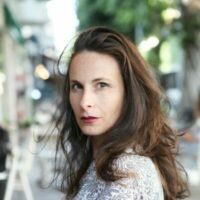