Nivi Alroy is a multidisciplinary, artist based in Israel. Alroy is focusing in drawing, sculpture, animation and installation. Her work has been exhibited in Israel and internationally in museums, galleries and site- specific installations. Alroy was the 2015-16 Hebrew University’s Safra campus of Mathematics and life Science visiting artist. She is the recipient of two Israeli Lottery grants, the Ahuvi Most Promising Artist award, the Rabinovich grant, Arts Asylum small grant, a Tel Aviv special projects grant and the AICF fellowship. Alroy took part in various residency programs, among them, the Triangle workshop and the AIR gallery residency programs in New York and The Asylum workshop.

These days, her collaborative exhibition with musiciam Nadav Reboh is up at the Tel Aviv museum and she is working on a solo show for the large hall at The Herzliya Museum of Contemporary art.

Nivi Alroy’s lexicon consists of fields far-removed from one another; nature, domestic life and the world of life science.

Nivi’s work often deals with the intersection of science, culture and society. She draws the line between communication in the most basic forms of life to human relationship and interaction. This fascination had led to collaborations with researchers coming from fields such as stem cell research, chemistry, and genetic bioinformatics. In recent years Nivi has been inspired by the de-extinction movement in the scientific world: a controversial practice that involves genetic engineering and cloning with the aim of re-creating extinct species. These heroic/hopeless human attempts to capture and defy the passage of time by creating lab-induced nature raise questions on life and death, on end and beginning. 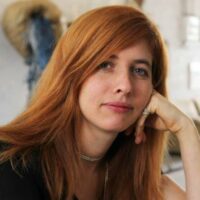