Virtuoso violinist Niv Ashkenazi has captivated audiences with his heartfelt musicianship and emotional performances. Praised for his “extremely colourful interpretations, characterized by maturity and authority” (Pizzicato Magazine), he has made several Carnegie Hall and Kennedy Center appearances, and has performed in Europe, the Middle East, and across North America. His conviction that the impact of music serves people beyond the concert stage motivates him to collaborate on projects that create a strong emotional bond with his audience.

In the 2019-2020 season, he was the first ever Artist in Residence at the Younes and Soraya Nazarian Center for the Performing Arts (The Soraya). His debut album, Niv Ashkenazi: Violins of Hope, the first solo album recorded on one of the Violins of Hope, was released in March 2020 on Albany Records. It has received international critical acclaim and was named one of the 10 best classical recordings of 2020 by the Chicago Tribune.

Niv has performed with members of the Los Angeles Philharmonic, Juilliard String Quartet, Cavani Quartet, and Ariel Quartet. He has appeared as a soloist with the Culver City Symphony Orchestra and Kaleidoscope Chamber Orchestra, among others. He has been a guest artist and given masterclasses at La Sierra University, California State University, Northridge, and Westmont College. Other performance highlights include recitals at Weill Recital Hall, Kennedy Center’s Concert Hall, Terrace Theater, Millenium Stage, The Soraya, the Granada Theatre, the Perlman Music Program Alumni Recital Series, and the Epiphany Music Guild Series.

One of his most rewarding projects has been an ongoing involvement with Violins of Hope, a collection of instruments that survived the Holocaust and have been restored by Israeli luthier Amnon Weinstein and his son Avshalom. Niv’s work with Violins of Hope began with a residency in Sarasota, Florida through the Perlman Music Program and has since taken him to Ottawa, New Jersey, Connecticut, San Francisco, and Los Angeles for performances and educational engagements. His performances and educational work with Violins of Hope have been featured on ABC7, Spectrum 1 News, Telemundo, the Los Angeles Times, and other major news outlets.

Niv has been invited to perform at the Lake George Music Festival, Perlman Music Program’s Chamber Music Workshop, Music Academy of the West, Keshet Eilon Summer Mastercourse in Israel, and iPalpiti Festival of International Laureates. Dyad, his innovative violin and bassoon duo, has performed on many concert series on the West Coast, collaborated with dance companies, and frequently commissions and performs new works alongside traditional repertoire. Niv has performed for Street Symphony, an LA-based nonprofit which places social justice at the heart of music making and serves communities disenfranchised by homelessness and incarceration in Los Angeles County.

Niv is also in demand as a speaker. He has spoken and performed at the Jewish Funders Network Conference, and at Secret Knock, one of America’s most exclusive networking events. He has been a frequent guest on radio stations and several podcasts including WMHT, WGTE, and Harmonious World Podcast in the UK, and has played live on classical radio station KMZT.

Niv holds both a B.M. and M.M. from The Juilliard School, where his teachers included Itzhak Perlman and Glenn Dicterow. He serves on the professional advisory board of Inclusion Matters by Shane’s Inspiration, a global nonprofit organization dedicated to building inclusive playgrounds, and formerly served on the board of the Los Angeles Youth Orchestra. 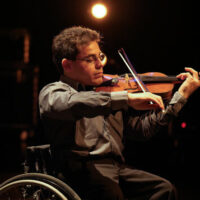