Her multidisciplinary work both in practice and theory is closely connected to the holistic-phenomenological school of thought.
She is 7th generation descendant of a family living in the holly 'Kabbala' city of Tsefat, Israel since the early 19th century.
She was a senior lecturer at the Bezalel Academy of Art and Design, Jerusalem and at the Faculty of Architecture and Town Planning at the Technion, Haifa.

Her first book: The Act of Creation and the Spirit of Place: A Holistic-Phenomenological Approach to Architecture / Edition Axel Menges Stuttgart / London, was listed in the books of the year selected by the Royal Institute of British Architects (R.I.B.A)

In the book Review by URBAN DESIGN International / Palgrave Macmillan Journals:
"Portugali's quiet revolution may be the one that passes the ultimate test of time"

Portugali's second book published: A Holistic Approach to Architecture, "The Felicja Blumenthal Music Center and Library" Tel Aviv / Edition Am Oved Tel Aviv
Her third book published : ‘And the alley she whitewashed in light blue - The secret of all those timeless places where one feels »at home«
Film * Architecture * Art’ / Edition Axel Menges Stuttgart / London 2022
(The book includes a free streaming access to watch the film)

Portugali's work is documented in books, in the Dictionair De l’Architeture Du xxe Scielle / Hazan Publication France, in professional journals, in the press and on TV.

Among the buildings she designed is the world-known "The Felicja Blumenthal Music Center and Library" at the historic heart of Tel Aviv.
Her work was exhibited in the Venice Architecture Biennale, Barcelona Spain, Linz Austria, San Paolo Architecture Biennale etc.
Her feature Hybrid film "And the alley she whitewashed in light blue" of which she wrote its script, directed, edited and did the production design. Was world premiered at the International Mumbai film festival, India.

The film can be seen as the third of a trilogy following the buildings she designed as an architect and the published books she wrote. 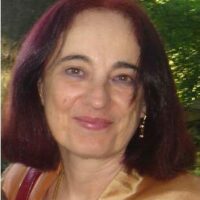