Neta Pulvermacher, a Choreographer, Dancer, Performer and Professor of Dance, was born in Kibbutz Lehavot Habashan, Israel, and graduated from Juilliard in 1985. She earned an M.A. in Dance and Dance Education from Teachers College/Columbia University and an MFA in Dance from Hollins University. She is a professor at the Jerusalem Academy of Music and Dance and the artistic director of the JAMD Ensemble.

Pulvermacher choreographed over 90 works for her NY based company and other companies and institutions around the world. In New York, her company, the Neta Dance Company has been presented at Dance Theater Workshop, Danspace Project, The Joyce Theater, 92nd Street Y and many other venues. The company toured throughout the U.S., Israel (Israel Festival), Europe, Costa Rica, Africa and Canada.

Her choreographic work has been supported by the American Israel Cultural Foundation, National Endowment for the Arts, NYFA, The Jerome Foundation, Mary Flagler Cary Charitable Trust, Maxine Greene Foundation and The Greenwall Foundation among others; and she received a special choreography award from Bessie Schoenberg (1995). In 2018 and 2019 she created and directed a unique city and site specific project in Jerusalem, entitled “Body, Site, Dance” – a full evening combining original commissioned work by seven choreographers that opens up a dynamic space for the multiple and often contradictory narratives that are Jerusalem. The latest project in the series, Public Parking was commissioned by the Israel Festival 2021 and premiered at the Yes Planet Underground parking garage in Jerusalem.

She was the founder, original curator and producer of the critically acclaimed A.W.A.R.D. Show! Series (Artists With Audiences Responding 2 Dance) held at six major US Cities: NYC, Chicago, San Francisco, Los Angeles, Seattle and Philadelphia and supported by The Boeing Corporation and Scott G. Kasen. Pulvermacher choreographed for director Mira Nair’s acclaimed film, The Namesake (2007). In 2006 she was invited to the White House in recognition of her international work as a choreographer.

Pulvermacher served as associate professor of dance at the University of Florida School of Theatre and Dance from 2006 until 2013. She was awarded the 2010 UF College of Fine Arts Teacher of the Year and the 2011 International Educator of the year. In 2013 Neta moved back to Israel following an invitation to become the Dean of Dance at the Jerusalem Academy of Music and Dance.

Since returning to Israel she has created new works for students at ,JAMD Vertigo Dance Workshop, the BGU Dance Company, and the Jerusalem Dance Theater. In September 2016 she was invited to premiere her solo, “It’s About Time” in the Tasmania Dance Move Festival in Hobart Australia. She directed and organized “Dancing to A Different Tune”, an International dance deans and directors gathering” in Israel in May 2017.

She was a founding faculty of the UARTS international MFA in Dance. Commissions include “Imagine that you are a Mouse” for the Barnard College Dance Department in NYC. Her autobiographical solo show, Utopia and the Night is currently touring throughout Israel and was presented in Berlin, NYC, and Arizona (ASU). 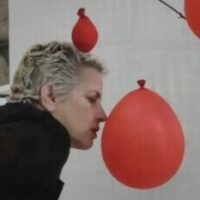