Born in Herne and growing up in Bochum, Nadia Migdal began playing the violin at the age of five and won first prizes in the musical competition “Jugend Musiziert”. She stopped her pursued ice hockey career, when she first saw a performance at the Playhouse in Bochum at the age of twelve.

During high school she played various roles. In 2005, she began studying acting at the Zurich University of the Arts (ZHdK), where she finished her master’s degree in 2010 (MA).

In 2018 Nadia Migdal did Aliyah to Israel and lives in Tel Aviv- She works as a freelancer in different constellations, for example with the Germany-based theater collectives Korso-op Kollektiv, Prinzip Gonzo as well as with the transnational theater company KULA Compagnie. She also creates own performances and works for film and television.

In 2007, she received the sponsorship award of the Armin-Ziegler Foundation, and at the „Theater Summit of German-speaking Drama Schools” in 2008, she won both jury and audience awards with the musical-theater production You Must Remember This. In 2011, she was nominated as the “best young actress” in the well-renowned magazine “Theater Heute”, in 2020 and 2021 for “best production” together with the Korso-op Kollektiv. In 2017 she was nominated for the German Comedy Award for the sketch comedy „Knallerkerle“. 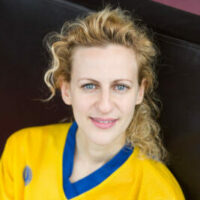