Miriam Fried has been recognized for many years as one of the world’s preeminent violinists. A consummate musician – equally accomplished as recitalist, concerto soloist or chamber musician – she has been heralded for her “fiery intensity and emotional depth” (Musical America) as well as for her technical mastery. Her supreme blend of artistry and musicianship continues to inspire audiences worldwide.

Miriam Fried has played with virtually every major orchestra in the United States and Europe and has been a frequent guest with the principal orchestras of Boston, Chicago, Cleveland, New York, Philadelphia and Pittsburgh, as well as with the Israel Philharmonic, the London Symphony, the Royal Philharmonic and the Vienna Symphony. Recital tours have taken her to all of the major music centers in North America and to Brussels, London, Milan, Munich, Rome, Paris, Salzburg, Stockholm and Zurich.

Ms. Fried’s highly praised New York recitals of the complete Bach Sonatas and Partitas for solo violin were the culmination of three years of international performances. She returned to this music, recording the complete Sonatas and Partitas in France in the spring of 1999 on the Lyrinx label. She has also made a prize-winning recording of the Sibelius Concerto with the Helsinki Philharmonic under the direction of Okko Kamu, available on the Finlandia label, which has become a best-seller.

Chamber music plays an important role in Ms. Fried’s musical life. She was the first violinist of the Mendelssohn String Quartet for ten years and collaborates regularly with her son, pianist Jonathan Biss.

Miriam Fried plays a particularly noteworthy violin, a 1718 Stradivarius that is said to have been the favorite of its 18th-century owner, the composer-conductor Louis Spohr. It was also owned by Regina Strinasacchi who, it is thought, used the instrument to play with Mozart the Sonata in B-flat, K. 454, which had been written for her.

A noted pedagogue, Miriam Fried is a professor at New England Conservatory and is invited to give master classes throughout the world.
Since 1994 she has been program Director of the Ravinia Steans Music Institute, one of the country’s leading summer programs for young musicians. During this time she performed regularly at the Ravinia Festival as soloist with the Chicago Symphony, in recital and in chamber concerts.

During her sabbatical leave during the 2015-16 school year , Ms. Fried returned again to the Bach solo Sonatas and partitas. She recorded a series of lectures addressing performance questions relating to these works. The lectures are now available on iclassical-academy.com. They will soon be followed by masterclasses focusing entirely on this repertoire. During this year she will perform all of the sonatas and partitas in several venues including the Ravinia Festival, Belgium, Toronto, Vancouver, Baltimore and in Jerusalem. The Jerusalem concerts were recorded for release in 2017. 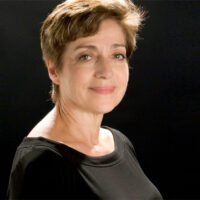