Gavrilov cross-disciplinary practice originates from my studies, which span from the rational (law, criminology) to the creative (history of art, photography and art) as well as her professional background as an agent and producer of films, TV, and theatre. The juxtaposition of the practical and the abstract, of business and art, of the concrete and the elusive- has guided and shaped her work and her vision of the world.

Also, the figure of her grandfather plays a role: a scientist and photographer, he was born in Berlin in 1893 to a well educated and wealthy family, traveled to Palestine in 1913 and took many photographs. He also served as an officer in the military in World War 1.

For years, he tirelessly took photographs of people in all these settings, piling up a stunning archive that is a source of images for her to elaborate upon today. She unravels his sensitive and vast documentation of a world that no longer exists, enlarging and reprinting the photos on canvas. she leaves in the original scratches, cracks and flaps made by the passage of time, so that they remain just as she received them.

Like Gavrilov, her grandfather was interested in people, and was preoccupied with questions of identity and history. She is now continuing his lineage and his quest, and so she has added her own photographs, printed on paper, using this fusion of generations and techniques as a point of departure to a new creation. 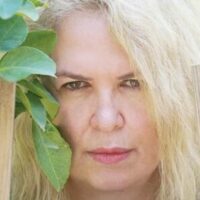