Micha Ullman (1939– ), sculptor and painter. Ullman was born in Tel Aviv, the son of Yitzhak Ullman and Lily Hirsh, who emigrated from Germany in 1933. Ullman spent his childhood in Tel Aviv where he lived with his extended family. After his army service, he studied art in the Bezalel Academy of Art and Design (1960–64). In 1965 he studied in London at the Central School of Arts and Crafts. From 1970 until 1978 Ullman taught at Bezalel, but after an ideological rebellion by the teachers and the students there, Ullman was fired. He began to teach at Haifa University and from 1991 was also a lecturer at the Academy of Art in Stuttgart, Germany.

Ullman participated in the Venice Biennale (1980) and in the Sao Paulo Biennale (1989). He was awarded many art prizes in Israel as well as in Germany and became a well-known artist in both countries.

Ullman used graphic techniques and sculpture in his art. In most cases, the drawings of the sculptures were printed and exhibited beside them or in a separate exhibition. For a better understanding of Ullman's abstracts, it is recommended to observe all those components.

From 1982 Ullman began to create public sculptures. He created site-specific works, some of which were so minimal in size that they became almost unseen. Some of his public sculptures were placed at ground level or even beneath it, so most of the time the audiences stood on them without being aware of it. This subversive style is a characteristic of Ullman's art. One of his first digging works was created in 1972. Ullman excavated two potholes one in kibbutz Mezer and the other one was situated in the nearest Arabic village Meser. In a symbolic act Ullman took the earth of each hole and filled the other one with it. This conceptual action was connected to the art style of the 1970s as well as to the political meaning of Ullman's art.

One of his noted works is the monument Library (1995, Bebelplatz, Berlin), which commemorates the book burning of May 10, 1933. The sculpture was a closed hall, below the ground, covered with a glass square. All the walls were covered with shelves and in general was reminiscent of a library that could contain around 20,000 books, similar to the amount of books burned that night. The white hall is lit with constant artificial light so the surroundings, the sky and the viewer, are reflected in the glass. This modest monument was very heartrending and it attracted a great public.

The shape of Ullman's works was abstract, but their content was very symbolic. Ullman used linguistic double meanings in his works, referring to literary, philosophical, religious as well as historical meanings. Being an Israeli who was working outside of his country was expressed in the meaning of the works, for example, by creating a linkage between the works and Jerusalem (Molad – New Moon, 1994, Schloss Solitude, Stuttgart). 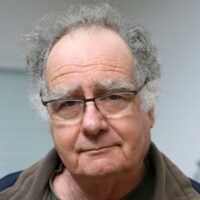