Matan Chacoty began playing clarinet in 2016, at the age of 13. Before that, he studied baroque recorders for 3 years in elementary school. He began learning clarinet at “Hasadna” conservatory with Yehiel Lock. Over the years, Matan studies mainly classic music, but played also jazz and klezmer. In 2018, he was accepted to the high school music program of “The Yellow Submarine”, where he learns theory and plays jazz and popular music.

Since 2017, Matan plays in the wind orchestras of “Hassadna” conservatory under the baton of Sagit Mazuz, and participates in ensembles and groups under direction of Yehiel Lock, Hilma Digilov and others. In 2018, Matan was accepted to the senior national youth wind orchestra, and to the wind program of the JMC (Jerusalem Music Center). In 2019, He was accepted to trial of outstanding musicians in the Education Ministry, and received a scholarship from the America-Israel Culture Foundation. In 2020, Matan competed on the wind instruments competition of the kfar-saba conservatory and reached the second stage. In the past years, Matan has also participated in masterclasses under the supervision of Ilya Shcwartz, Sharon Kam, Corrado Giuffredi, Yonatan Hadas and other musicians from around the world. 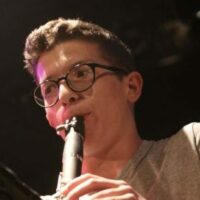