The music of composer Lior Navok (b.1971) is being played worldwide in venues such as Carnegie Hall, Berlin Philharmonie, Sydney Opera House, Oper Frankfurt, Deutsche Oper Berlin, Staatsoper Berlin, Nuernberg Opera, among others.

His passion for the stage has brought the birth of two operas: The Bet – based on a short story by Anton Chekhov and An Unserem Fluss (By Our River). The latter was commissioned by Oper Frankfurt. 2019-20 saw the birth of few new compositions, including Gitz & Schpitz for actor and ensemble, to original libretto dealing with war resistance; Drift – for alto flute and ensemble among chamber and solo music.

Navok’s passion for the children’s world brought the creation of The Little Mermaid – after Andresen and The Adventures of Pinocchio – based on Collodi. These works were performed in many languages including German, French, Hebrew, Spanish and Korean. Recent works for children include Brave Little Timmy, to an original libretto and Beauty and the Beast, following the well-known story.

As pianist and founding member of the Butterfly Effect Ensemble, he performs live-composition using a wide array of instruments and techniques. The ensemble specializes in creating live scores for silent films, covering the days of the silent-film era up to 1929. 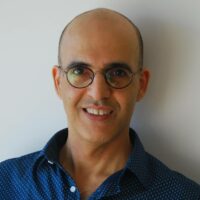