Lior Avivi was born in 1994 in Kiryat Ono, the only son of his mother and has two stepbrothers from his father. He spent his childhood in Neve Savyon neighborhood in Or Yehuda and played in Or Yehuda’s soccer team.

During junior high, for the first time, he moved closer to the field of theater. A physical theater course with Ofir Dagan was opened At the Community Center. He meant to go to art class, but life led him on a different path. At ninth grade, he played a lead role in an end-of-year performance, directed by Shlomi Edri. After junior high, his family moved to Kiryat Ono.
During high school, he was, of course, in a theater track led by Alma Weich Choshen and Noga Elkin Efrat. In his third year, they took “The Arsonists” by Max Frisch. Lior played the role of Biderman.

Lior’s military service was in the Intelligence Corps. Following his service he had a big trip to South America, and later started studying acting class at the Kibbutzim School of Performing Arts.

during his first year there, he participated in an evening of original monologues with material he wrote, winning the honorarium. He won first prize at the Ohel Theater scene evening. Lior and his classmates performed at the Haifa’s Children’s Festival with a piece They created together.

During his second year, he participated in an scholarships evening of scenes with two scenes of his own, and took the second place. In the next evening of original monologues, he wrote and directed a monologue for his good friend Hila Gudai (also an AICF alumni). together, they won first prize. At the same event, Lior also took the third place with a monologue he performed, written by his friend Adi Halif.

His classmates and himself also collaborated and performed at the short theater festival in “Tzavta”, with “The Game” by Erez Pollak.

Performed in “Eyes” from “Senses”, by Anya Hilling.

Performed in “Melancholy” by Sarah Rohl.

Lior is a winner of the AICF scholarship. 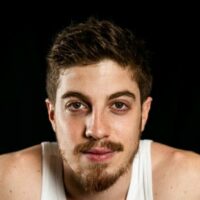