« Liat Cohen's guitar is to music what a beating heart is to life. »
Le Monde

Pioneer of the renaissance of classical Guitar in contemporary creation, Liat Cohen gave her first concerts at the age of 14. Named « the Princess of Classical Guitar », her style is inspired, inventive and virtuoso.
First Prize of the Paris Conservatory, a Graduate of the Schola Cantorum (Concert Diploma unanimously with congratulations from the jury), from the Paris Ecole Normale, Liat Cohen was the first guitarist to be awarded the Nadia Boulanger Prize from the Fondation de France.
Distinguished as one of the best guitar players in the world by Guitar Magazine and Classical
Guitar, she also won numerous international contests, among which those of Rome, Paris and Tel-Aviv.

Liat Cohen played on all five continents and collaborated with the renowned conductors and orchestras. She played on the greatest stages: Rudolphinum in Prague, Radio-France, the Théâtre
du Châtelet, the Brussels Palais des Beaux-Arts, Paris's Théâtre des Champs-Elysées, the Cerclo de Bellas Artes in Madrid, the Palazzo Barberini in Rome, the Cortot Hall, The National Theater of Costa Rica, the Opera of Montpellier, the Skirball Cultural Center of Los Angeles, the Theater of Jerusalem, the Théâtre des Bouffes du Nord in Paris… and took part in a great number of
international festivals (Gstaad, Montpellier, at the Festival of Israel, at the Buenos Aires
Guitarras del Mundo Festival, in London, Melilla, Cordoba and Cap Ferret…).

A muse, Liat Cohen has explored and transcended her repertoire. Among her projects transcriptions for guitar of works by J.S. Bach which she recorded at the Abbaye of the
Mont St-Michel while she was an Artist in Residence.
Liat’s magnetic temperament on stage supported by her mastery of the instrument, is a source of inspiration for a great number of composers. Many concertos and solo works were dedicated to her. Her concerts with the Quatuor Prazak and the Talich Chamber Orchestra were recorded by Mezzo TV ; the DVD « Une guitare à Prague » received the Opus d’Or Prize.

In 2014 Liat Cohen recorded the CD “Rio-Paris” (Warner Classics) with Natalie Dessay, Agnès Jaoui and Helena Noguerra. It reaches rare peaks for an album of classical guitar. First place in all categories and several months in the first place of sales of classical music, as well as large concert tours in dozens opera houses to finish at Olympia Paris.
Liat’s recent album “Madrid-Paris” was published by Warner Classics, in which she's surrounded by opera stars Rolando Villazon, Sandrine Piau and Charles Castronovo.
Liat is an ambassador of the SAVAREZ guitar strings.
www.liatcohen.com 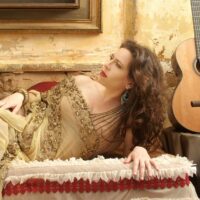