Keren Anavy was born in Israel and is a New York based multimedia artist working in drawing, painting, installation and performance. Anavy received her MFA from Haifa University, Israel, and her BA in Art History from Tel Aviv University, Israel. She graduated with an art teaching certificate at at Hamidrasha School of Art, Beit Berl College, Israel.

She has an ongoing collaboration with visual artist Tal Frank, exhibited five exhibitions together and working together at Radio28, an international residency program and exhibition space at Mexico City.

She has been a college level educator for over 10 years, often working closely with the local community. Anavy writes about art and culture in New York and North America at Basis for Art & Culture Magazine (Hebrew). She is a recipient of the Asylum Arts, New York Grant (2017-18). 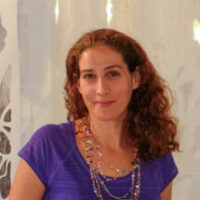