Karen is a French horn player, originally from Kfar Saba, Israel, and currently based in London, UK. Karen graduated in 2018 from the Buchmann Mehta School of Music. During that time Karen worked as a freelance horn player (Isr6 Chamber Orchestra, Netanya Kibbutz Orchestra, the Revolution Orchestra, Ha’Bima theater and more) and as a horn teacher in conservatories such as Petah Tikva, Kfar Saba, Kiryat Ono, Ramat Gan and Herzliya West. In both Herzliya and Ramat Gan she was a conductor and head of the ‘Musical School’ project in several schools.

Karen is currently in the second year of her studies for a Master’s degree at the Guildhall School of Music and Drama in the Orchestral Artistry course, in collaboration with the London Symphony Orchestra.

Karen participated in music festivals in Israel, the UK and France for chamber and orchestra music.

Karen is a founding member of ‘Kleo Quintet’ (woodwind quintet, based in London). With the quintet she played for the Ligeti Total Immersion day for the BBC Radio 3, recording the Ligeti 10 pieces (and Ligeti horn trio with a different group), Mansion House for the Lord Mayor of London, Guildhall School of Music and Drama Chamber Music Festival and at Wigmore Hall for Nicholas Daniel Oboe day together with the renowned oboist Kyeong Ham. 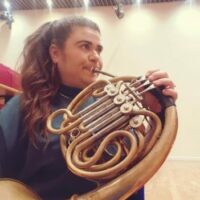