In his dual role as violinist-composer, Ittai Shapira is a rarity in the 21st century, but follows a long line of musicians who, in writing and performing their own works, have relished both forms of creativity.

Described by the NY Times as “an Israeli dynamo with a flourishing solo violin career”, Ittai Shapira regularly performs with prestigious artists across the globe. Engagements include performances with the BBC Concert Orchestra, Belgrade Philharmonic under Sir Neville Marriner, Cape Town Philharmonic,Czech National Symphony under Libor Pesek, Detroit Symphony under Yoel Levi, English Chamber Orchestra with Yuri Bashmet at the Barbican, Israel Chamber Orchestra, Israeli Virtuosi at Alice Tully Hall hosted by Itzhak Perlman, the Philharmonia, Polish Chamber Orchestra, Rochester Philharmonic, Royal Philharmonic, Russian Philharmonic with Thomas Sanderling, and the Symphony Orchestras of Budapest, Harrisburg, Jerusalem, Omaha and Shanghai. Other performances include a tour of Finland and Sweden with the Oulu Sinfonia, a tour of Shapira’s own Violin Concertos, “Concierto Latino”, with the Key West Symphony, “The Old Man and the Sea” with “The Knights”. This work, inspired by the Hemingway classic was released by Champs Hill Records with the Royal Liverpool Philharmonic.
​
In his role as a composer, Ittai Shapira continues to write a variety of works, including a Double Violin Concerto entitled "Magyar", performed and recorded in Austria with the Arpeggione Orchestra; a Violin Concerto inspired by Hemingway’s The Old Man and the Sea, a Violin and Cello Concerto, “Sephardic Journeys”, and a set of Solo Violin Caprices.
​
He has recently premiered and recorded his Concerto for Violin and Cello, “Sephardic Journeys”, coupled with his Violin and Clarinet Concerto, a multidisciplinary project in close collaboration with Sir Salman Rushdie and visual artist, Alexander Klingspor. The two works will be coupled on a recording with the BBC National Orchestra Wales; “MAGYAR” for two Violins and Orchestra with Hagai Shaham and the Arpegionne Orchestra in Austria; Other Concertos include “Chunhyang” for Violin and Soprano, With philosopher Laureen Park and Grammmy Winner SopranoHila Plitmann, and “The Ethics” in collaboration with anthropologist Natasha Zaretsky, for Violin and Chorus- premiered at Carnegie Hall. Additional performances took place in Florida, Washington DC, culminating in a tour of Canada with pianist Constanze Beckmann and the Schulich Singers.

Ittai Shapira made a critically-acclaimed Carnegie Hall debut in 2003 with the Orchestra of St Luke's, performing the world premiere of the Violin Concerto written for him by compatriot Shulamit Ran. His live recording of this concerto is featured in a compilation of Ms Ran's works performed by Daniel Barenboim and the Chicago Symphony Orchestra. He returned to the world renowned stage as soloist with the American Symphony and Glenn Close.

​Ittai Shapira performs as recitalist and chamber musician throughout the U.S., Canada, Europe, Australia and China, at venues ranging from the Queen Elizabeth Hall and the Louvre Auditorium to the Weill Recital Hall at Carnegie Hall. Festival appearances include including Aspen, Banff, Ravinia and Schleswig-Holstein.
​
Ittai Shapira’s discography of over 20 CD's (for labels including Champs Hill, EMI, Meridian Records,Sanctuary Classics, Quartz and Sony/BMG) includes both standard and unusual repertoire: from Bruch to Berio. Shapira’s playing is also featured in the soundtrack for a film made about Daniel Pearl, The Journalist and the Jihadi and a children's project with Brooke Shields, "The Runaway Bunny". A performance hosted by Larry King reached an audience of 55 million playing on the Jerry Lewis Telethon, televised nationally in the US.

As the dedicatee of no fewer than fourteen concertos, the most recent is the Katrina Concerto by Theodore Wiprud. Shapira continues to collaborate with some of today’s most respected and communicative composers, enjoying particularly fruitful musical relationships with Avner Dorman and Dave Heath. He has recently premiered a Violin and Mandolin Concerto with Avi Avital, Florin Parvulescu and curated this special project as soloist in a joint project between the San Francisco Symphony and Conservatory. He continues to tour as soloist with his own compositions with orchestras in Austria, Brazil and the United States.

Ittai Shapira, who now lives in New York, grew up in Israel, where he studied with the renowned pedagogue Ilona Feher. He continued his studies at the Juilliard School with Dorothy DeLay, Robert Mann and Naoko Tanaka.

A recipient of the prestigious Clairmont Award, Ittai Shapira co-founded the Ilona Feher Foundation with esteemed colleague Hagai Shaham, dedicated to the nurturing and promotion of young Israeli violinists. He has served as Classical Advisor at Molloy College and the Weill Cornell Music and Medicine Program.
​
He is the Founder and Artistic Director of Sound Potential, an organization dedicated to medical, educational, and societal healing through Music. His music has been developed and used for therapeutic purposes at Mt. Sinai Hospital, Cambridge (UK) and Brigham Women's Hospital, Harvard. His music has been studied at the Juilliard School, McGill and Tel Aviv Universities.

Recently, the Victor Herbert Foundation has given him an award in recognition of his innovative projects as Soloist, Composer and Curator. 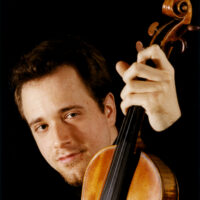