A New York Times music critic gave a mixed review of her performance at Alice Tully Hall, writing that "while Miss Margalit's cultured pianism was never less than correct and well mannered, she politely declined to turn these pieces into the sort of powerfully compelling individual conceptions these composers obviously intended them to be". She toured widely, playing in the Americas, Europe and Asia. She played with numerous orchestras, including the Berlin Philharmonic, the American Big Five, the Israel Philharmonics, the London Symphony, and the London Philharmonic. She recorded for EMI, Universal Classics and Jazz, Black Box, Chandos, Resonance, Decca and Koch International.

Israela is an internationally renowned concert pianist and recording artist. She has recorded extensively for EMI, Chandos, Black Box, Resonance, Koch International and Decca. Her most celebrated recordings include the 20th Century Anglo/American Chamber Music Series (British Music Industry Award – Best CD) the Brahms First and Rachmaninoff Second Piano Concertos with the London Symphony Orchestra, the Saint-Saens Second Piano Concerto and the Schumann Piano Concerto with The London Philharmonic Orchestra, and the Shostakovich First and Schnittke Second Piano Concertos with The Moscow Philharmonic Orchestra. She appeared with fifty of the world’s greatest orchestras, including The Berlin Philharmonic and The American Big Five, and toured in the US, South America, Western and Eastern Europe, as well as the Middle East and Asia.

Parallel to her musical activity, she has been an award-winning television writer, and a critically acclaimed playwright. Her US/German co-produced TV Specials, including a series for Sir Peter Ustinov, have been shown in more than thirty countries and received The Gold Medal of The New York Film and TV Festival, two NEA Media Awards and an Emmy Nomination. Her plays Night Blooming Jasmine and 3 O’clock in Brooklyn have been performed in New York to great acclaim. Her play Trio was recently premiered in Moscow, where it continues to enjoy tremendous success. It has since been presented in St. Petersburg, Kiev, Kazan, Samara, and Vladivostock. 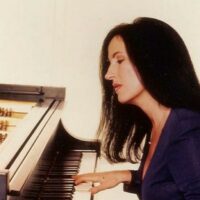