Born in Israel in 1976, Ilan Volkov began his conducting career at the age of 19. Following studies at London’s Royal College of Music, he held posts including principal conductor of the London Philharmonic Youth Orchestra, assistant conductor of the Boston Symphony Orchestra, and principal conductor and then principal guest conductor of the BBC Scottish Symphony Orchestra. From 2011 to 2014 he was music director and principal conductor of the Iceland Symphony Orchestra; his arrival coincided with the opening of Harpa, Reykjavík’s new concert hall, and his tenure included the creation of the Tectonics Festival, which combined classical modern music improvisation, electronics, rock and other new-music genres and which, since 2014, expanded with residencies in cities like Glasgow, Adelaide, Oslo, New York, Tel Aviv, and London. A frequent guest with leading orchestras worldwide, Ilan Volkov works regularly with a wide range of ensembles and appears in many of the foremost festivals of the world, including Salzburg, Edinburgh, BBC Proms, Lucerne, and Berlin. Highlights include performances with the BBC Symphony and Stuttgart Opera, as well as City of Birmingham Symphony, SWR Stuttgart, Atlanta Symphony, Seoul Philharmonic, Ensemble Intercontemporain, WDR Köln, and Oslo Philharmonic orchestras. Equally interested in opera, He has conducted Tchaikovsky’s Eugene Onegin for San Francisco Opera, Britten’s A Midsummer Night’s Dream at the Glyndebourne Festival, Britten’s Peter Grimes for Washington National Opera, Weill’s The Rise and Fall of the City of Mahagonny for Théâtre du Capitole de Toulouse, and Bartók’s Duke Bluebeard’s Castle with Israeli Opera. Ilan Volkov is one of the guiding forces behind Levontin 7, one of the most adventurous venues in Tel Aviv, which brings together classical, jazz, electronic, rock and other musical genres, reflecting his determination to keep alive the creative spirit and sense of artistic adventure that shaped so many late 20th-century works. 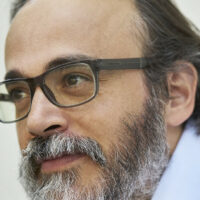