Guy Figer is one of the most promising violinists to emerge in recent years. He is a two-time First Prize winner in the Paul Ben Haim competition for violin and chamber music. Among his other awards are the Thomastik Infeld Prize of the Prague/Vienna /Budapest summer academy and scholarships from the America-Israel Cultural Foundation. He was also a finalist in the “Vittorio Gui” chamber music competition in Florence, Italy.

Figer has appeared as a soloist with the Tel Aviv Soloists Ensemble, the IDF chamber orchestra, the “Soloists in the Loop” orchestra, and the Thelma Yellin High School for Arts Orchestra. He has been broadcast on Israeli radio, Vienna Radio, and on WFMT Chicago. As a recitalist and chamber musician, Guy performed in Switzerland, Germany, Austria, England, Holland, the United States, and his native Israel. He is often invited to perform with chamber groups such as the Millennium Chamber Players and International Chamber Artists. He has also collaborated with distinguished musicians such as Tabea Zimmerman and Maxim Vengerov.

Figer attended master classes with the late Isaac Stern, the late Dorothy Delay, Pinchas Zuckerman, Miriam Fried, Sylvia Rosenberg, Vadim Gluzman, and Donald Wallerstein, as well as with members of the Amadeus, Bartok, Hagen, and Emerson Quartets. As a former member of the Israeli Carmel Quartet, he performed throughout Europe and Israel and worked with members of the famous Alban Berg Quartet at the Musik Hochschule in Cologne, Germany.

Mr. Figer has a rich orchestral experience that includes principal positions in the West-Eastern Divan Orchestra under Maestro Daniel Barenboim, the Tel-Aviv Soloists, the Oistrach Symphony Orchestra, the Chicago Civic Orchestra, and the ISymphonietti01 in Switzerland, as well as Concertmaster positions with the IDF Chamber Orchestra, Guest Concertmaster with the Young Israel Philharmonic, and the Chicago College of Performing Arts Symphony. Recently Figer was invited to be the Concertmaster of the NY Chamber Players.

Mr. Figer holds a Bachelors of Music degree from the Tel-Aviv music academy and a Masters of Music degree from the Chicago College of Performing Arts. He started his musical education at the age of seven at the Givataim Conservatory, studying the violin with Vera Weidman, Vally Bluthner, and Avi Abramovitch. Among his teachers of later periods are Shmuel Ashkenasi, Hagai Shaham and Irina Svetlova. 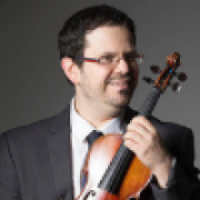