Hadani is one of those rare and dynamic performers who delivers a combination of musical ability and charisma, he will make you think and relate to the lyrics as well as want to dance, clap and sing them. He creates contagious grooves and fun.

Hadani enters the world of music, mature and ready, with no musical education or playing skills. He comes from a unique adventurous journey in his life. He travels and migrates to places around the world. He studied industrial design and built playgrounds and concrete furniture. He worked as a photojournalist for more than three decades, covering wars, disasters, events, phenomenon, people. Witnessing and covering horrific and extreme situations alongside amusing and exciting ones.

"When you take photos of a person, you study the body language. You need to notice the expressions, the small nuance as well as delicate details". Things we relate as obvious received by Hadani's music with enlightening meanings.

Hadani wrote about those details and insights. Exploring them and making the listeners curious and identify with the songs. For instance, singing about the imperfection in life ("Perfect World" and "People"). Just like a photographer he reflects on the world and reveals simple, unnoticed insights.

Hadani's music is influenced by a varied and rich playlist spanning over five decades. "My mom used to sing a lot and music has always been a meaningful part in my life".

Although Hadani doesn't play, he has excellent pitch as well as a good sense of rhythm. Armed with a lot of curiosity and open mindness, he broadened his musical taste listing to a wide range of genres and styles both local and overseas, in particular from Australia, Norway, Brazil, Germany, US and UK.

"I'm an inventor by heart. Very intuitive, fulfilling my vision through freedom and creativity.
I'm inspired by many things that I'm exposed to, and never limit myself with rules, whether it’s a photo-shot in a strange angle or designing a unique product. The approach to music creating and song writing is just the same."

And his songs have touched many people. In particular his song 'Daf-Ed' inspired by a film he produced of his dad's Holocaust Testimony. The film was screened at Tel Aviv cinematheque and the song he created moved a lot of the second generation to Holocaust survivors.

Hadani performs with a band of players who fell in love with his songs:
Hezi Biderman, a bass player who founded the Israeli "Shadows" band, Tzdi Orgad, an experienced drummer and Johny Becker, a guitar player, Rimon graduate who played and founded a few bands. 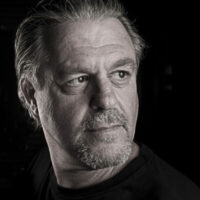