Gad Kadosh is a young, intensely engaging conductor with a keen musical mind. 2018 saw his debut with the Royal Philharmonic Orchestra, to which he returned to conduct the Valentine’s Day Opera Gala in 2019. In 2017 he conducted a new production of Fidelio for the Longborough Festival Opera, where he debuted 2015 with Rigoletto to tremendous critical acclaim. In the 2015/16 season he conducted the London Philharmonic Orchestra, after having assisted Maestro Vladimir Jurowski and the London Philharmonic on the opening 3 concerts of their season.

Other notable performances have included conducting the acclaimed Die Zauberflöte production at the Komische Oper Berlin, Hänsel und Gretel at the Staatsoper Hannover, and the headline concert at the Two Moors Festival in Exeter Cathedral in October 2014. During 2014 he also conducted the Cambridge University Musical Society in Brahms’ 1st Piano Concerto with Peter Donohoe and Symphonie Fantastique (Berlioz), following in the footsteps of famous alumni such as Andrew Davis, Ed Gardner and Robin Ticciati.

Gad received the first prize in the MDR Conducting Competition, Leipzig, in 2011, and thereafter conducted the MDR Symphony Orchestra in concert in Weimar. He was then selected by Bernard Haitink as one of seven candidates to take part in his 2012 Conducting Masterclass in Lucerne with the Lucerne Festival Strings.

Gad studied piano performance at the Buchmann-Mehta School of Music in Tel-Aviv, where he was awarded scholarships from the America-Israel Cultural Foundation, and went on to study conducting with Lutz Köhler in Berlin and Martin Hoff in Weimar.

Gad is also a pilot and an aviation enthusiast. 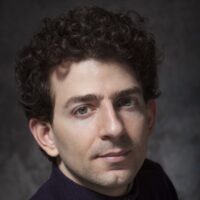