Gabriel Bass designs and produces one of a kind furniture, Judaica and sculptural work to enrich the experiences in the places where we dwell and pray.

Gabriel produces the work with a craftsman’s attention to detail from the highest quality materials in the world: a selection of solid woods, glass, metal, and Jerusalem stone. His designs arouse the sentiment of tradition along with displaying the elegance of modern form. His work is displayed in Museums and Galleries, housed in synagogues and private homes, and has won awards at competitions in the United States and Israel.

The Custom Carving studios are located in the beautiful surroundings of the Judean Hills, minutes from Jerusalem, where his style is influenced by an influx of Jews from around the world, modern and ancient architecture, the Israeli landscape, and living Jewish culture.

Gabriel Bass was born in Seattle, Washington. He received his BA, focusing on “Cultural Preservation Through Art”, at Hampshire College in Amherst, Massachusetts. He apprenticed under Master Carver, Richard Campbell, on the Musqueam Reserve in British Columbia and interior designer and carpenter Gabi Bar-Lev in Vancouver and continued his art studies at the Pratt studios in Seattle and the Bezalel Academy for Art and Design in Jerusalem. 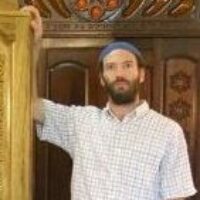