The Faran Ensemble was formed in 2009 by three musicians sharing similar musical vibes and values, who decided to embark together on a spiritual quest. Their journey, expressed in music and sound, reflects the beauty of nature, traveling through different sceneries, from the clean and quiet desert to luscious green hills, sometimes even passing through the hectic noise of the city.

Their instruments belong to the ancient traditions of the east, allowing the musicians to combine mystical sounds with modern influences. In their music, Mediterranean landscapes weave an enchanted soundscape, a magic carpet to take the listener on a voyage to faraway lands.

The ensemble’s name, Faran, refers to Wadi Faran, a dry desert riverbed which in winter fills with water and life and in summer is silent and pristine. The Faran crosses three countries but ignores all artificial human borders.

The Faran Ensemble recorded its first studio album, simply named Faran, in 2012. The independently produced album comprises of seven compositions, four of them featuring guest musicians. The album, which is available for sale, was reviewed in the September 2014 issue of Songlines Magazine, published in the UK. In 2014, the Faran Ensemble participated in the International Jewish Music Festival of Amsterdam contest. Where it won the grand prize, in addition to additional prizes for best composition and best Israeli talent. The ensemble also participated in the Jewish Culture Festival of Karkow, the Jerusalem Sacred Music Festival, the International Showcase for Jazz and World Music Festival in Tel Aviv, the Yearot Menashe Festival and more. 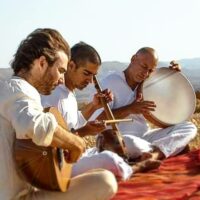