Evyatar Hassanov was born in 1993 in Jerusalem and began studying the violin at the age of six. Between 2005 and 2011 he studied at the Academy High School of Music and Dance under the guidance of Sophie Pikovsky and later with Michael Gaisler. In 2009 he was accepted to the Jerusalem Academy of Music and Dance, where he began his undergraduate studies in parallel to his high school studies. He then served in the IDF between 2012 and 2015. In 2017 he completed his undergraduate studies at the Academy of Jerusalem, as a student of Prof. Lihay Ben Dayan. He currently plays in the first violin section of the Jerusalem Symphony Orchestra.

Evyatar has been a recipient of the America-Israel Cultural Foundation annual scholarship since 2007. during his undergraduate studies, he was a four time recipient of the Chamber Music Full Scholarship for Outstanding Musicians. 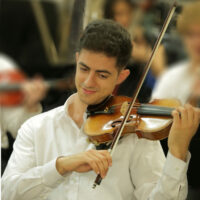