Eran Sulkin, (b.1997) pianist from Israel, studying with Prof. Ronan Oʼhora at the Guildhall School of Music and Drama in London. He is an America-Israel Foundation distinguished scholar since 2012. Eran served at the Israel Defense Forces with the status of an Outstanding Musician. He studied between 2015-2018 at the Buchmann Mehta school of music in Tel Aviv University with Prof. Asaf Zohar and in the Tel Aviv conservatory with Ms. Natalia Blumenfeld.

Eran performed concerts in Israel and abroad. Played concerts for the Paul Hindemith foundation in the “Joachim Sall” of UDK, Berlin; in Lubeck, Germany, during the “Schleswig-Holstein festival” masterclasses and in Aspen CO, USA, during the 2018 Aspen Music Festival, and in the Guildhall Summer Chamber Festival, 2019.

He won prizes at the Israeli national competitions, “Young Artist” competition of the Israeli radio in Jerusalem, “Piano Forever” in Ashdod and the Israel Conservatory 1st prize.

Eran participated in the International Johannes Brahms Competition, 2018, in Portschach, Austria, and was a semi-finalist. 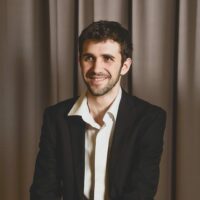