Eran was born in Petach-Tikva in 1994. Growing up, he studied percussion at the Petach-Tikva Municipal Conservatory where he acted as Principal Percussion player of the Youth Wind Orchestra under Mr. Michael Delman and lead player of the Percussion ensemble. In 2017 he received his B.Mus in Percussion Performance from the Buchmann-Mehta School of Music, where he studied with Mr. Alon Bor. He also studied in the Vocal Department of the school, with Ms. Danna Glaser. Eran started his studies while serving in the Israel Defense Force as an “Excellency Musician” at the Education and Youth Corps (2012-2015). In 2020 Eran Finished his Master’s Degree and earned his M.Mus in Vocal Performance from the Conservatory of Music in Brooklyn College, Where he studied with Mr. Mark Schnaible. Eran was a Fulbright Fellow for the academic years 2018-2020. These days, Eran is studying towards an M.A.Mus in the joint program of the Jerusalem Academy of Music and Dance, where he studies with Mr. Jeffery Francis and Mr. David Sebba and the Musicology Department of the Hebrew University, Jerusalem.

Eran acted as a Principal Percussion of the Young Israel Philharmonic. He also played at the Buchmann-Mehta School of Music symphonic Orchestra, Percussion ensemble and Contemporary Music Workshop and in the “Tremolo” Percussion ensemble under Mr. Tomer Yariv (“Precadu”). During the last years he played with the major orchestras in Israel: the Israel Philharmonic, the Jerusalem Symphonic Orchestra and the Haifa Symphonic Orchestra under the batons of conductors like Maestro Zubin Mehta, Andrea Battistoni, Xu Zhong, Manfred Honeck and many more. As well for playing The Percussion, Eran sung in the Thelma Yalin School Alumni Choir under Mr. Yishai Steckler with whom he performed in the “Israeli Schubertiade” (2016) and the Avi Nesher movie “The Sins” (Ha’Chataim). Eran was singing in the Israeli Opera Choir under Mr. Ethan Schmeisser from 2016 to 2018. He sung in the productions of “Faust”, “Tosca”, “Nabucco”, “Don Carlo”, “Dido and Aeneas” and “Carmen”.

2017: Winner of the Buchmann-Mehta School of Music Audition for the Gala concert with Maestro Zubin Mehta. 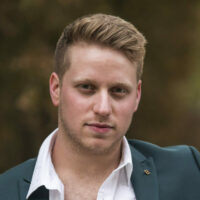